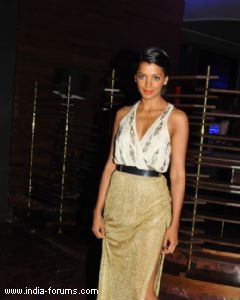 Mugdha Godse, the third contestant to be eliminated from "Khatron Ke Khiladi 5", says she fulfilled her dream by participating in her favorite reality show.

"I have been a fan of the show since it was telecast on international channels. I always wanted to be a part of it and my dream was fulfilled this time," the 27-year-old said here in an interview.

"It was a challenge, it was about conquering your fears. So, I thoroughly enjoyed my journey. And I was very happy that I was making my debut on TV with a show like 'Khatron Ke Khiladi'," she added.

Mugdha was eliminated after the electrocution stunt as she took the maximum time to complete the task compared to other participants.

But for her the most dangerous was the 'crocodiles in a tank' stunt.

"My most dangerous stunt was the crocodile stunt and everyone saw it. I had decided that I won't do it and I will go home. But it was a question of reputation as I didn't want to go out in the first elimination," Mugdha said and added her friends convinced her not to give up so easily.

They told her that "if you fear animals then you should not go out in that particular stunt. So, I am very happy that I went out in the electrocution stunt because I didn't want people to say that Mugdha is afraid of animals and she was out (eliminated) in that stunt."

Based on the international show "Fear Factor", the fifth season of "Khatron Ke Khiladi" is being hosted by director Rohit Shetty.

TV actress Pooja Gor was the first to be eliminated while model Rochelle Maria Rao was the second.