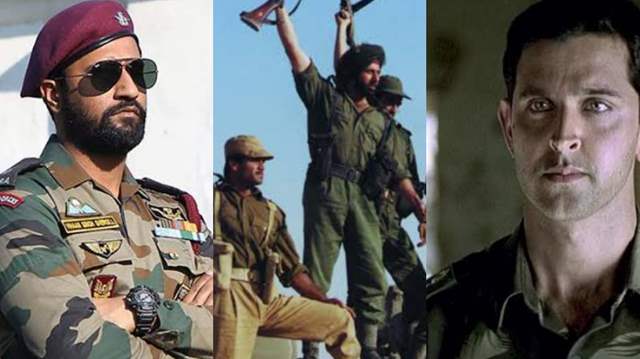 Every year on July 26th, the entire country gathers to commemorate the heroes who gave their lives fighting for our country during the Kargil War. Well, even the industry has always celebrated a soldier with its art of making movies.

Talking of which Bollywood has given us the best of war-based films and their songs bring forth a strong sense of national pride. From 1997's Border to Sidharth Malhotra's Shershaah the films have paid a tribute to real-life heroes.

Today on Kargil Vijiay Diwas we present you a list of five Bollywood songs that will give you goosebumps.

The music to Vicky Kaushal starrer Uri departs from the conventional pattern of patriotic anthems in order to incorporate modern sounds and a noticeable increase in intensity in its tone. Indian soldiers are preparing for a surgical attack on the country's adversaries while Challa's(Main Lad Jaana) heart-pounding urge creates an enthralling atmosphere.

Sandese Aate Hai is a classic patriotic song from the 1997 movie Border. Depicting the yearning of soldiers’ families to see them back home safe and sound, the track is a must for every occasion meant for the Indian army. The song portrayed the situation of soldiers and their families. It’s been more than two decades since the film released, but the song is loved by all the generations.

The song Teri Mitti was featured in the movie Kesari last year. One of the finest songs of 2019 was the one written by Manoj Muntashir, performed by B Praak, and composed by Arko. This one will definitely make you teary-eyed.

The overwhelming martyrdom song from LOC: Kargil is an unforgettable glimpse into the Indian Army's heroism and will. The war film is based on the Kargil War fought between India and Pakistan.

The coming-of-age story set during the 1999 Kargil War by Farhan Akhtar, Lakshya's 'Kandhon Se Milte Hain Kandhe', depicts an unbreakable spirit that will be intimidating for the adversary across the line. This song still manages to trigger your goosebumps.

For the unversed, The Kargil War between India and Pakistan was fought from May 3 till July 26, 1999, after the Pakistani Army illegally occupied Indian land at the Line of Control (LOC) in Kargil. About 30,000 Indian soldiers fought against Pakistani troops and won. 527 Indian soldiers were martyred.

This Kargil Vijay Diwas, gather your friends and family to truly thank and pay your respects to our courageous soldiers and warriors.