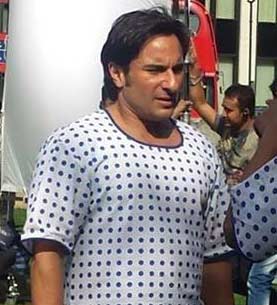 Saif Ali Khan's funny side will be on show in "Humshakals" as he has donned the garb of a woman for the comedy. He says his wife and actress Kareena is taking his experiment "sportingly", but he would have reacted differently to such a weird look.

When asked what was Kareena's reaction to his look, he said: "Kareena is amazingly sporty... she laughed looking at me. Had I been in her place I would have filed for divorce. She found my chest too large (laughs)."

Director Sajid Khan has reportedly infused many fun elements in the film, which includes a song where Saif is seen romancing Riteish Deshmukh.

Talking about it Saif said: "Riteish is great and I had a great time with him. He is very attractive."

Not new to the genre, thanks to his roles in "Hum Tum", "Salaam Namaste", and "Kal Ho Naa Ho", Saif said he was keen to return to comedy.

"I personally wanted to do a comedy. I love Sajid and this is the funniest film I have ever done. It's lovely to do a comedy film."

Also starring a bevy of stars like Bipasha Basu, Tamannaah Bhatia, Esha Gupta and Ram Kapoor, the film is coming out June 20.