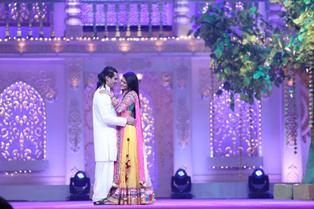 Star Plus' Holi - Masti Gulal Ki' will see your favorite television stars play Holi in a special and unique eco-friendly way. Television's hottest couple Karan Singh Grover and Jennifer Singh Grover who are known to sizzle the small screen with their presence will host 'Masti Gulal Ki'. As much as the viewers are excited to watch them together on screen after a gap of four long years, the couple too seems to be equally excited.

A source from the sets informed us that it was a delight watching Karan and Jennifer shooting together. The couple who tied the knot a couple of years ago still seemed to be living in their honeymoon period. A totally smitten Karan could not stop himself from displaying his affection for his lady love. He kept showering hugs and kisses in between the shots while Jenny blushed.

"Karan and Jennifer are an extremely cute love-struck couple. Their chemistry was apparent even off the screen. The two couldn't keep their eyes off each other. While the other couples mingled around with each other, the two were more than happy enjoying each other's company", says the source.

If we believe the sources, the chemistry between Karan and Jennifer was too sizzling to put the house on fire!!

Well, Karan we know you love your wife way too much and who wouldn't if she is a wife like Jennifer!

Mikii 5 years ago So much PDA and fake couple !

swaron9113 6 years ago kajen my cutest cuties,
tommorow is the great day to
see you back together