Fans of Karan Kundra and Kritika Kamra of NDTV Imagine's Kitani Mohabbat Hai fame who were eager to see their favorite couple together in a new show are in for a sad news!! 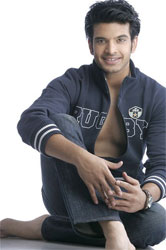 According to our source, "Karan Kundra will be replacing Manav Verma, the nephew of Raj Babbar who was earlier playing the role of Veeru".

On the reason for replacement, our source states, "Manav was not that good in acting, and we needed a good actor for the role. Manav shot till last night, but an overnight decision was made and Karan Kundra has bagged the role and has started shooting too".

Confirming this news, Vikas Goopta, Creative Head said, "Yes, Karan Kundra will now be playing the role of Veeru in Bayttaab. Karan is excited to play this character, and is in love with it".

The outgoing Manav Verma expressed his unhappiness though and told us, "I was never informed of the change. I shot with them till yesterday night, and today I got to know that they have replaced me with another actor. There have been many actors who have got better with experience, and I feel sad that they did not even give me an opportunity to do better".

Karan Kundra on his part is happy to have bagged the role in Bayttaab. "He says, "I have left two good offers, to get this role. I am in love with this role, and am excited to play a mellowed down character when compared to Arjun Punj".

Tell him that his fans wanted to see him along with Kritika in Pyaar Ka Bandhan, and Karan laughs it off and says, "See, my show is at the 10 PM slot on Sony, and that will be followed by Kritika's at 10.30 on the same channel. This is the closest we can get on screen (smiles)".

Karan Kundra has started shooting from today, and his promo will appear tomorrow. His entry sequence will be aired day after tomorrow.

For the uninitiated, Karan Sharma who is presently seen in Pyaar Ka Bandhan was to play the role of Veeru earlier. Later, Manav Verma was roped in to play the same role, and now we are all set to see Karan Kundra in the same role!!

Hope Karan Kundra is able to create the magic as Veeru now!!

Dts gr8 we will B able 2c him evrydy nw :) At least we can c hm on screen btr dan nufin!

shovaish 13 years ago you are looking hot in bayttab... i am missing you & kritika

+ 4
13 years ago I don't mind Karan playing the role but i don't think Manav was doing a bad job, i think he was doing pretty good for his first show. i would be happy if he stays.

13 years ago looks like u are slowly getting used to ur new role gl :)