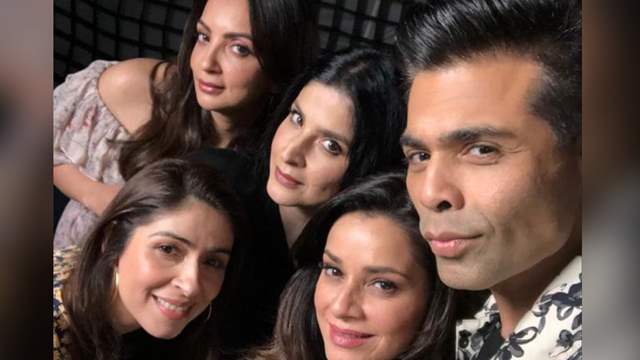 As the title suggests, the series features wives of Bollywood actors: Maheep Kapoor, Neelam Kothari Soni, Bhavana Panday and Seema Khan and gives a fun insight into their glamorous lives. While the show has been receiving all kinds of response on social media, one particular tweet has caught everyone’s attention.

A Twitter user trolled KJo as he wrote, "I think we can all agree that the favourite wife in #FabulousLivesofBollywoodWives is Karan Johar. #NetflixIndia."

To this, Karan had the most epic reaction and took the comment in a sporting spirit. He responded saying, "Ok this really made me laugh! A troll with a sense of humour is so refreshing! Thanks, Doc!"

Earlier, when the show released, Karan Johar shared a selfie with the leading ladies of the show, Maheep, Neelam, Bhavana and Seema. He captioned it, "A friendship spanning over two decades....we have loved and lived through frivolous fights, emotional breakdowns, party times, morale lows and also so much happiness!!!! The fact that the four of them are on a @netflix_in show makes me so excited and exhilarated for them! Love us! Troll us! But we know you won’t ignore us! Here we are #fabulouslives of these gals!"

Karan Johar Summoned By NCB For Details of 2019 Party

pyar-ishk 1 months ago Well Queens should wear their crown, and KJO is the biggest Drama Queen in BW. Now he wants to adapt another reality show with drama. Girl Bye