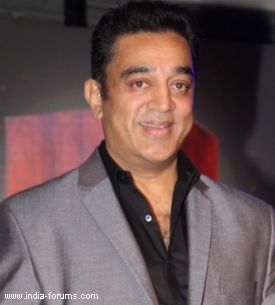 Actor-filmmaker Kamal Haasan, known for his work across all southern languages, was Saturday named for the Padma Bhushan award on the occasion of the 65th Republic Day.

Haasan will get the award for his contribution to Indian cinema over the last five decades.

The 59-year old, who has so far starred in over 200 films, made his cinematic debut as a child actor in Tamil film "Kalathur Kannamma", which earned him the president's gold medal.

His first adult role was in his mentor K. Balachander's 1973 Tamil drama "Arangetram". The two had since then had worked in over 30 films together.

Some of his prominent Tamil films include "Moondram Pirai", "Nayagan", "Pushpak", "Virumaandi" and "Anbe Sivam".

Besides working predominantly in Tamil filmdom, Haasan had also starred in films in other southern languages such as Malayalam, Telugu and Kannada.

Films such as "Sagara Sangamam", "Swati Muthyam" and "Subha Sankalpam" have popularized him in Telugu, while films such as "Pushapaka Vimana" and Benkiyalli Aralida Hoovu are regarded as his best work in Kannada.

In Malayalam, he is known for films such as "Vrutham", "Daisy" and "Chanakyan".

Besides acting, Haasan has also proved his mettle as a director, writer, singer and producer over the years.

He had so far directed five films such as "Chachi 420", "Hey Ram", "Virumaandi", "Vishwaroopam and soon to release "Vishwaroopam 2".

Haasan is the winner of three National awards and 19 Filmfare awards so far. In 1990, he also received the Padma Shri.

He has two daughters - Shruti Haasan, a popular actress and Akshara Haasan.

Sanjay Choudhary Attacked By Goons; To File a Police ...
an hour ago