It was 'Kaante Ki Takkar' between Swapnil Joshi and Ali Asgar on the sets of NDTV Imagine's Ghar Ki Baat Hai as a weird incident took place on the sets last Sunday. It is reported that the duo were shooting for the episode of SRK's Red Chillies Idiot Box show, when suddenly Swapnil ended up smacking Ali 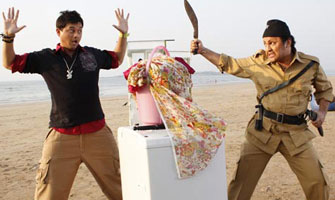 As per our sources, "On Sunday, they were shooting for a particular episode wherein Ali Asgar had a chabuk in hand as per the need of the sequence. Swapnil all of a sudden snatched it from Ali's hand and hit him. Ali was shocked for a second and was hurt too, but he continued to shoot. The director Anant Mahadevan and co-stars were in for a shock seeing the scene".

As per sources, Swapnil realized his mistake and is reported to have apologized for whatever happened.

But commenting on this, Anant Mahadevan, Director, Ghar Ki Baat Hai said, "There was no tiff as such, but it was just that the improvisation in the scene went wrong. Whatever happened was by mistake and not intentional. Swapnil felt guilty, but all was smooth even after the shoot", he quips.

We talked to the actor involved, Swapnil Joshi to know his side of the fact, but he laughed loud when we described to him the incident. The actor then clarified saying, "There was nothing at all there. We were improvising on a particular scene, and that's it. During a take, there was a contact between Ali's hand and my chabuk which was accidental. We even completed the scene and moved on. It was too minor to even mention. I don't know who gives all these news".

We tried contacting Ali, but he was not available for comments.

Well, for the moment, we can say that all's well that ends well, and above all, 'Yeh toh Ghar Ki Baat Hai'… What say, folks?

13 years ago well, its good that everything is alright!