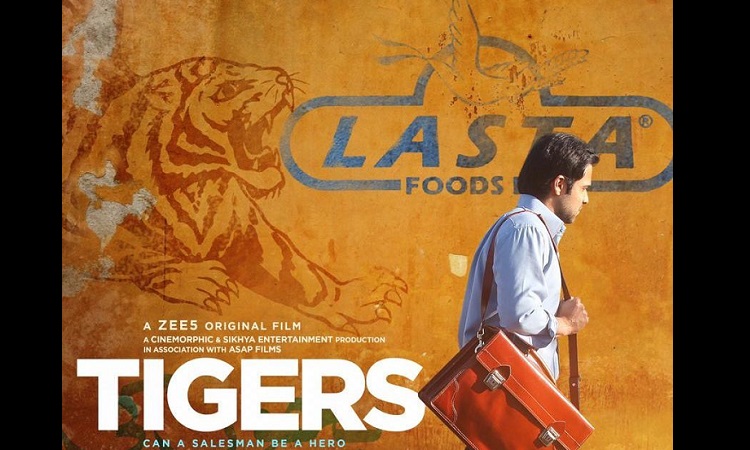 Tigers is basically a fight between the right and the wrong. This is the true story of a humble Pakistani pharmaceuticals salesman who sacrificed everything to raise a roar against one of the world's most powerful multinationals (the company is clearly identified as Nestle, but is fictionalized as Lasta) whose baby formulas mixed with unsafe water were killing infants.
The film begins with an exchange of questions and answers between Sen. Edward Kennedy and a spokesman for a baby formula producer during Senate hearings in 1978. With shocking directness, the spokesman refuses to take any responsibility for the deaths of infants in developing countries. And it sets a base for the further story.

Set in mid 90's, Ayan played by Emraan Hashmi belongs to a middle-class Pakistani family and is married to Zainab which is being portrayed beautifully by Geetanjali Thapa.

Ayan is a salesman who struggles to sell cheap but effective local drugs, in a market where consumers don't trust them and believe the fancy packaging. Winning a job with the multinational Lasta seems like a dream come true for him and his young wife, until a doctor friend returns from Karachi, where he has been researching, with horrifying news. The Lasta infant formula that Ayan has been selling so successfully to poor women is being diluted with filthy water, and their babies are dying from diarrhoea and dehydration.

Then Ayan quits his dream job and is all set to fight against the MNC with the help of various International NGO's.
The further journey is quite heart wrenching but it is the reality of how poor people are suffering due to corporate greed.

Talking about the direction, the Oscar-winning director keeps us engaged with the story and with some twists which keep us at the edge of our seats.
Emraan Hashmi is surely one of the underrated talents of Bollywood who portrays every role with perfection and here too he steals the show.
The supporting characters including Adil Hussain, Supriya Pathak, Satyadeep Mishra and Vinod Nagpal lends a good support.
Ratings:(4/5)