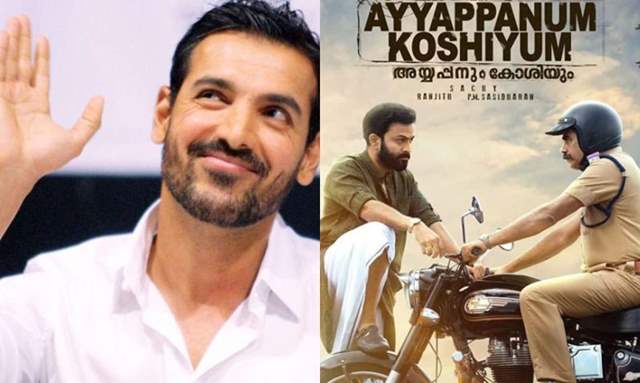 Actor John Abraham acquired the Hindi remake rights of Malayalam film Ayyappanum Koshiyum. The film originally starred Prithviraj Sukumaran and Biju Menon in the lead roles. John took to Twitter to make the official announcement and stated that the Hindi remake will be produced by his production house JA Entertainment.

John Abraham wrote on Twitter, “Ayyappanum Koshiyum is an entertaining film that strikes a perfect balance between action, thrill and a good story. At JA Entertainment we are keen to bring such appealing stories to our audience. By doing what we do with dedication and focus, we hope to make a truly engaging film with this remake. This film also fits right into our future plans as we believe that the Hindi film industry will bounce back with efficient and entertaining projects soon after the Covid19 crisis.”

Ayyappanum Koshiyum, a Malayalam action thriller, written and directed by Sachy and produced by Ranjith and P. M. Sasidharan under the company Gold Coin Motion Picture Company released in 2020.

The film revolves around the conflict between Koshy Kurien, an influential and wealthy ex-Havildar, and Ayyappan Nair, a Sub-inspector in Attappadi. Now that John has bagged the Hindi remake rights, which actors would you like to see in the lead roles? Let us know in the comments below.

Meanwhile, John Abraham has his calendars full of exciting projects like Satyameva Jayate 2 and Attack lined up ahead.

John To Do Action like The Hulk in Satyameva Jayate 2, says Director ...

'The camera should never go off', Nawazuddin Siddiqui on ...
10 hours ago

Parineeti Chopra to Feature in ALTBalaji & ZEE5's 'The Test ...
11 hours ago