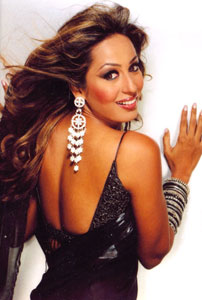 Featured Video
Tell us about your Jungle Experience.
As a reality show, very tough. We got so little to eat. And if we won the stars by winning ,then we were supplemented with some extra food. And the incessant rains. God! Did they just like that? No! They brought with them all the creepy crawly things.  It was very tough.

How is this experience different from Bigg Boss?
Bigg Boss was full of mind games and politics. It was a show where they used boredom to test you. There you got the basic necessities but not the luxuries and are completely cut off from the outside world. Whereas, in the jungle you got to speak to Yudi and Mini when you went to perform the maha jungle task. It was sort of a breather. So while Iss Jungle was easy on the mind, Bigg Boss was easy on the body.

Apparently, you have also worked in a film titled Jungle, for which you had to shoot in the jungles of India. So how was this experience different?
The film's shooting was very easy. We used to get proper food. I used to look like a junglee but I used to smell nice because I had perfume on. Here, you're not even allowed that. In the film due to make-up my hair used to stand that way. Here they were like that naturally because you can't use any toiletries. So you know, this was the 'real' jungle.

According to you who is or was the most sensible contestant on the show?
Umm… Aman Verma.

Who do you think should win the contest?
At first I wanted Marc to win. But then he got eliminated. So I wanted Aman to win. But now, out of the remaining junglees, I think Mona is the best contestant to win.

What controversies did you witness when in the camp?
I saw that Aakashh tries to boss over everyone. He is always jumping up and down to become a leader. And when he doesn't become one he gets very upset. But he did not mess with me because he is scared of me. And who is not? Chetan used to follow Aakashh blindly. He is a very good boy but somehow somewhere he has played accomplice to a lot of misdoings, basically because he was with him. I was really rooting for Chetan to win until I saw how he supported Aakashh in his every mischief.

Anaida was very irritating, like one of those unmarried aunties in the family who pokes her nose over every matter and going- beta yeh kya pehna hai?(child what is this that you are wearing?). She was insanely frustrating.

Mona is good, she is handling the game well. She is the one who has to know about what everyone is up to. If Mona is singing that means she is actually attentive to something else and because she did not want people to know it, she distracted them by singing.

Aman has his own way of handling the game. He used silence as his weapon. But a good sport.

Jay gets very badly treated over there. They all beat him up sometimes. They call him Gay, Gay Sean. And Jay quietly listens to them and even laughs with them. Jay even does all the work and Chetan and Aakashh stand on either side of him like Mugambo and Gabbar Singh. So I have told Jay that when he comes out he will be known as Jayanti. In the camp even girls are stronger than him! You know I had this nice image of Jay because he used to host Dance India Dance so smartly. But now it's totally down as I've found he is a wimp.

What would you like to say about the show?
It's a brilliant show. One which you can't take easily. It is the mother of all reality shows.

When will you and Krishna tie the knot?
(Laughs) I don't know. I can't even answer it because Krishna's daddy is the one who can answer it. We are waiting for his approval to tie the knot. The minute he says yes, we will do it. But its for sure that we will have our wedding in a grand way. We will not elope and get married.

13 years ago kashmeera and anida must be of the same age and she is calling her a frustrated aunty?? everybody cant do cradle snatching like her plus she herself is so frustrated that she is planning to get married to a guy who is old enuf to be her son

+ 4
13 years ago what the h is wrong with her- spek for urself..no one else think so, just cuz she got out doest mean she can talk cr5ap abt others

13 years ago this woman doesn't noe how to talk sense
i mean ppl like her earn their bread & butter by fighting & abusing on reality tv....
jay shudn't hv been in tht place
hope he chooses shows tht r atleast sumthing he can do well

+ 5
13 years ago For once I agree with all her views but she has no right to label Anaida as Auntie, they are almost same age....and we would like to know why did she side with the bully when she was in the camp?

13 years ago Well Said!:)
I guess the qualifications to be on this show are an obvious lack of maturity and wild behaviour, this would really have to be the worst show there ever was lol.

agnes_shachi 13 years ago I agree with u kashmera, jay is a wimp n loser(very much). He's not like real man. The real man is not scared for anything, stronger and keep fighting. Even mona n anaida so really fight better than him. Loser never be a winner!! I dont like jay.

+ 3
13 years ago If someone doesn't retaliate to taunts then they're a wimp?????!!!!!!!!! Its called MATURITY which SOME people like her don't have!!!! Jai is a MUCH better than all the contestants there