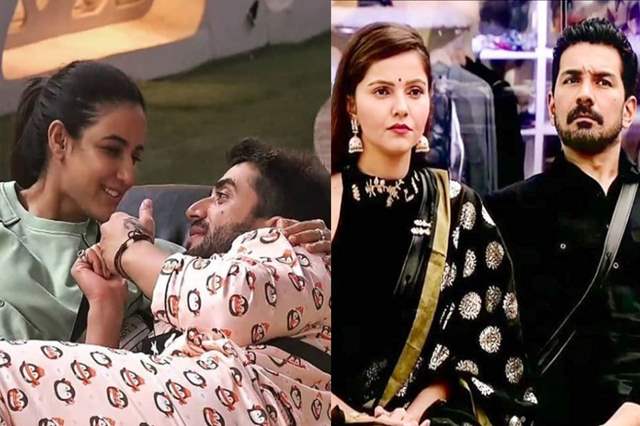 The eviction of Jasmin Bhasin continues to undoubtedly be one of the biggest points of Bigg Boss 14 which was a massive shock indeed. And imagine if her exit was such a talking point, how will her re-entry in the house be received. Yes. Bhasin will be re-entering the house to support Aly Goni in Family Week and she opened up Aly, and how she now thinks of Rubina Dilaik and Abhinav Shukla in a long interview with ETimes TV.

On Goni's game, she said, "Jasmin is all praise for Aly and his conduct on the show. She says, “When I go inside the house again, I will tell him to continue playing the way he has so far. He is the most real person inside the house. Aly isn’t playing dirty or clever games, nor is he manipulating anybody. Neither is he riding on anyone’s back to survive on the show. He is playing like a man and I have immense respect for him.”

About Dilaik and Shukla's game, she said, “Rubina Dilaik and Abhinav Shukla are two of the cleverest people inside the house. Full marks to their fantastic game plan. They know how to manipulate people and manoeuvre even an adverse situation in their favour. Bohot hi mahaan aur aadarsh tarah se cheezon ko apne favour mein karte hain. My only suggestion to Aly would be to not trust them at any point. In fact, it won’t be advisable to trust anyone blindly at this juncture.”

We have seen how Dilaik has been feeling guilty about Bhasin's ousting, she said, "That’s because their game has been exposed and deciphered. They are now justifying themselves. They know that they played dirty with me and were riding on my back. Unke game ko decipher kar diya gaya hai weekend par and bata diya gaya hai clearly. Toh ab unko guilt aur darr dono hai. So, they are dragging me in every conversation. I have stayed inside with them for 100 days, so I understand every move of theirs better than others.”

Even during her ousting from the show, she had a good bond with Shukla but now she thinks differently of him. She said, “His true side is finally coming out. I feel that he has a lot of pent-up aggression jo woh shuru shuru mein daba deta tha. I also feel that he is somewhere insecure about Aly because he knows that he is a strong contestant. A strong opponent often works as a catalyst in bringing out the real side of you, which may not be pleasant. Even though Abhinav didn’t save me during a nomination task, that didn't affect my equation with him. But what has upset me is his comment on Aly’s physical appearance during a verbal spat on the show. During the argument, Aly called him a jamoora, which meant that he dances to his wife’s tunes… now that’s something Rubina told me on several occasions on the show. She would call me Aly’s jamoora. However, Abhinav called Aly bhains (buffalo). Did he comment on his physical appearance because he is a tall and broad guy? That has hurt me and I am put off by that one comment made by Abhinav.”

2 months ago And you’re the most negative one ☝️ No one spoiled your game.. you spoiled your game by revealing you true toxic side..I would rather watch priyanka jagga than you in bb’s house

+ 5
2 months ago apna khel na saki aur bakwas advise de rahi hai. Ali will be in finals thanks to your leaving

2 months ago Someone, please tell Rubina and Abhinav's blind fans to stay away from them as well. lol