Remix girl Shweta Gulati has learnt the ways of the TV world rather quickly. No wonder she is quite calm with the news of Amber Dhara’s exit, in fact she kind of expected it. In a frank tete-tete with Telly buzz, this cute girl talks about what went wrong. 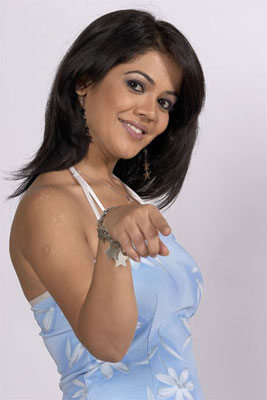 Featured Video
Amber Dhara is being axed!!
Well all good things come to a premature end. The conjoined twins’ saga was a very different story, but unfortunately it did not work. Having said that you have to accept the fact that Sony as a channel, does not enjoy very good TRP ratings.

Were you disappointed that the show is being wrapped up early?
I am quite glad that it ran for as much as it did, given Sony’s habit of taking shows off air very quickly. Take ‘Tujko Salaam Zindgi’ for example, it was yanked off within 3 months flat. It's time the channel did rethink on its programming strategy.

Were you happy with your character?
Yes, Sonya proved that I can do negative roles as well. After the super success of Remix, many had doubted that I could carry off a negative image, given my cute face. But I have proved them wrong. Don't people hate Sonya for the way she treats Amber and Dhara?

You had also done Jigar Ma Badi Aag Hai which too went off air rather quickly?
Jigar Ma was a experimental show for Sahara Filmy. They were introducing fiction for the first time in their movie channel. Unfortunately differences between the creative team and the channel ended the show in 13 episodes.

What next?
I am looking for roles which excite me. I am in no hurry to sign anything. Even after Remix, I had waited a year, before Amber Dhara came along. In between, I am quite content doing cameo appearances. There are few projects in the pipeline, Tellybuzz would be the first one to know when they do materialize. I am also doing a play next
month.

What type of reality shows would you is interested in?
I love to dance, so something like Jhalak would surely be high on my wish list. I know a lot is written regarding the politics in these format shows. But I rather concentrate on my dance and leave other things aside.

Would you enter Big Boss 2?
I had been approached by Sony, but I said no. Staying in enclosed surroundings with strangers for 3 months is not my cup of tea. Plus we all know how horribly beautiful, the first season turned out to be!

Another reality show, Mr. and Ms. TV featured new stars like you. What is your take on it?
I thought that the format tried to do too much. They mixed acting with singing and dancing. Some of the participants were doing mimicry as well. The biggest drawback according to me was its 9 day duration for it got over before it even started. Personally I feel that such shows need to run at least 2/3 months to get the viewers’ attention.

11 years ago wo shweta
my gut princess
u rock
love u
u r right...sony need to run their mind...

14 years ago Yeah..Why is sony doing this...Even they are taking out Khwaish..I love Khwaish.I think it's very good show and something new......

14 years ago thanks a lot.. i wish bothkaran and shweta did not turn down big boss we missed wonderful chance to see them together.. i am sure with these two in big boss it would have been different ball of game .
ps i love her forthrightness.. she speaks her mind..and her interviews are always a pleasure to read

+ 5
14 years ago I like her attitude. I don't watch AD often, but the times I do/did, I disliked her character.

Shows that the girl can act!!

14 years ago Thanx for sharing
I really like her responses

lolz i think AD lost its sheen later on...whether sony should have gven it a chance to revamp itself..is debatable..

but shweta was too good in it..after seeing and loving her as tia ahuja in remix..it was quite a shock to see her in a negative shade..but she carried it off pretty well..

i really hope to see her in a reality show..after seeing karan in mr and miss tv..i think shweta would rock it too..too bad she turned down big boss..lolz

u r the best shweta..