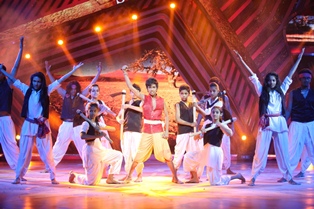 The upcoming episode of Boogie Woogie Kids Championship will see a reunion of sorts as ex - contestants of the show return to amaze everyone one more time with their performance. The best groups from the previous seasons will be seen matching steps with the little dancing sensations leaving the audience asking for more.

Blossom, Angles & Grooves, Versatile along with the groups of Shrikant, Rohan and Nitin will amaze the viewers with their scintillating and dhamekedaar performances.

In the episode, Aryan will be seen performing Robotics and B-boying on the song Kabhi jo badal barse with Srikant and group. After the performance, Aryan will hum a few lines but this time he is not alone.

The entire group will join Aryan and they will sing together much to the amusement of others. Also, Priyanka's performance on the song Banarasiya and Salaam will make her earn the BOO ring. Her act with Blossom group will become even more special as the boys will be dressed as girl and will stun everyone with their sizzling performance.

Deepika Padukone Arrives at NCB, to be Questioned over ...
35 minutes ago