View Profile
Rukhsar seems to enjoy her journey into Bollywood now, after a hiatus of 13 long years! After her stint at proving her credentials in 'Yaad Rakhegi Duniya', the actress got into a hiding, and now she is all set to make a comeback with Manish Gupta's 'Stoneman', after she took up a role in Ram Gopal Verma's 'D Company'.

Here is the actress in conversation..

Q.: Please tell us how would like to describe the film "Stoneman".
A.: It's based on a true incident which happened in 1983. It is the tale of a serial killer who used to injure poor people living in slums, by hitting them with huge stones. The film is based on that guy who was then very notoriously known as Stoneman.

Q.: What about your character in this film?
A.: I am playing the wife to Kay Kay Menon. She is a very strong person and she loves her husband very much. Despite having a very good married life, the distance between them increases after an incident. Her husband doesn't come home because of the pressure of job. As a result, she starts doubting her husband of having any affair. They start having altercation centered on that doubt, and the stoneman utilizes this chance. 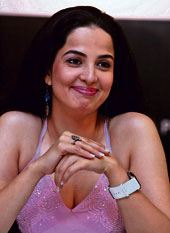 A.: I have already worked in two of his films, "D Company" and "Sarkar". So, I am already acquainted to his excellent writing style. Having the chance to work under his direction, I can say that as a director also, he is really good. I don't think he ever had any problem understanding our point of view as well as describing his points.

Q.: You have seen Manish Gupta as both writer and director. How do you find the difference between them?
A.: Look, one never can measure a writer by his written material while acting under a different man being the director. But while you act under the same writer working as the director, you can understand his talent and intelligence. At the same time, you can understand his behavior also. We don't spend that much time with the writer that we spend with the director. Keeping that in mind, I would like to say that Manish is much impressive as a director than as a writer.

Q.: We have seen you in most of Ram Gopal Verma's films. Have you signed any kind of contract with him?
A.: No, it's not a matter of contracts. Actually it's a matter of comfort. I feel comfortable working with him. At the same time, I have acted in two films with Manish and feel quite comfortable with him also.

Q.: After "Yaad Rakhegi Duniya" you kept away from the silver screen for a long period of thirteen years and came back to Bollywood with the film "D Company". Is there any special reason of re-starting your career with Ram Gopal Verma?
A.: When I decided to come back to acting, my manager sent my pictures to the house of Ram Gopal Verma only, and he approved them. There is no other reason that I can specially mention here.

Q.: Why did you take such a long break?
A.: (smiling) As you are telling me, I also can realize that it was really a long time. Actually my parents took me with them after I acted in "Yaad Rakhegi Duniya". They told me that with that film your wish of acting was over and there's no need of staying in the industry anymore. They wanted me to complete my studies first. After completing my education, I joined our family business. I was really busy with my business. When things seemed saturated, I looked back to my dream of acting. Even few of my friends also suggested me the same. I thought I would have to start all with the commercials but my luck offered me films.

Q.: You had to leave the industry despite having such a hit with the first film. How grieved you are?
A.: I felt really sad at the time of leaving it. But then, I got engaged in my job and I became so busy that I hardly had any time to cry over spilt milk. And coming back to the industry, I felt really fresh seeing that the industry treated me as a new comer. I always believe in learning and I think everyone must have the same urge to learn new things.

Q.: You acted as the solo heroine in "Yaad Rakhegi Duniya" and now you are sharing screen with other heroines. How do you feel?
A.: I don't bother whether I am appearing on the screen as the solo heroine or a side character or as a comedian. All I bother about is my character. If the character has no life, then there is no point in appearing on screen as solo heroine to pose in some dance sequences. Just for example remember my character in "Sarkar". It was small, yet full of life. That's how people still can remember me. It's really a matter of achievement for me that people can remember my character in a film where great actors like Amitabh Bachchan and Abhishek have acted.

Q.: Please tell us about your forthcoming films.
A.: Besides "Stoneman", I am also acting in films like "Allah Ke Bande", Rumi Jafri's "God Tussi Great Ho", Sagar Belari's "Kachcha Limbu", "90 Minutes" and Sony Pix' short films "Mrs. Joshi" and "Thanks Ma". In "God Tussi Great Ho", my character is of an ugly young lady who becomes quite beautiful afterwards. Manoj Vajpayee is sharing screen with me in "90 Minutes". It's the only film that is still to be shot. 40% of this film is though complete. They want to shoot it in Malaysia and because of having no permission, the film is still incomplete.