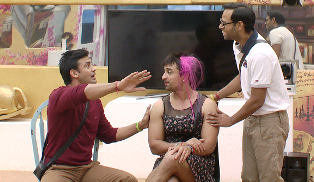 After all those fights and disputes in the Bigg Boss house, the housemates finally get an opportunity to celebrate, leaving behind all the differences that have developed between them.

For the past few days, the housemates have been indulging in verbal spats leading to misunderstandings and grievances.

To give them a much-needed break from all the drama, Bigg Boss decides to bring their smiles back, by giving Ajaz Khan and VJ Andy a secret task.

VJ Andy and Ajaz Khan are given the responsibility to bring everybody together and get them to bond over a laughter session.  Following the orders of Bigg Boss, Andy and Ajaz come up with the idea to entertain the housemates with a fun-filled chat show. Sangram Singh and Andy become the hosts of the show while Ajaz dresses up as a woman calling himself Haseena'. Andy and Sangram kick off the chat show on a hilarious note where they take digs at everyone leaving them in splits while Ajaz steals the show with his funny lady' anecdotes.

Later in the evening, Bigg Boss calls Andy and Ajaz in the confession room and informs them that they have successfully completed the task. As a reward for their victory and on the occasion of Sofia's birthday, Bigg Boss arranges for a party for the housemates in the garden area. As the clock ticks 12, the housemates surprise Sofia as they drag her to the garden area. Sofia is overwhelmed to receive so much love and affection from the housemates and thanks everyone endlessly.

Will the housemates be able to let go of all their differences or will they end up clinging onto them amid all the merriment?