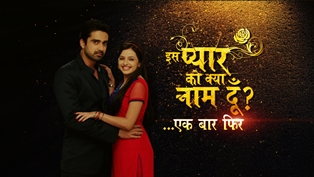 The show made a mark in the television industry by creating a marginal increase in the TVT numbers from 1394 to 2612 for the time slot 6.00pm. Previously Star Plus would run repeat episodes during this time slot, not a daily soap.

Mr. Sunjoy Waddhwa - CMD, Sphereorigins says "The time slot used by the soap is 6.00pm which was experimental, but it has achieved a great applause from the audience. This is the first time where you can see a Daily Soap at that slot. I really thank the crew of the show for their hard work and the most importantly the audience who have always been supportive towards us'.

suchiIPKKND2 7 years ago It's a great show!! Just loving it Ashlok @@@

+ 2
7 years ago Hehe I dnt knw why IPK n Arshi fans r even commenting n giving tht show importance (frankly I hate it bein tagged IPK) thts how they managed to grab attention of viewers.
It is nt IPKKND n thts where the issue is. Give the show any name if its tht great and see how it works.
So all IPK fans shud stop bashing tht show coz its nt IPK so why bother there 100s of show like tht do even we compare it to IPK coz we Knw IPK with its entire team is d best n no other show can even come close to it Dammit tht show means nothing. Wht they say or Do doesn't make a difference to IPK n it doesn't even exist. Don't wnt 2 talk abt it or watch it. I love IPK and SARUN DAMMIT!!!!

+ 2
7 years ago lol. so funny first of all the show z gaining trps bcoz it has a support ipk name on its bck ipk itself z a huge name to call !!! nd secondly the show wl never surpass the chemistry of real ipk where the crackling chemistry of sarun made the world mad !! people still want them bck !!!! ebp z just a copy nd paste of ipk hate this !!!

7 years ago What the..?? I dont know just HOW this show is being liked so much? The presence and impact that Barun n Sanaya had ca never EVER be created again. The charm and chemistry they had was their copyrights. This "ek bar phir" shit ruined all the good memories. I am so pissed off with these replacements..huh??!!

7 years ago saw someones comment that those who hate this shw r so jealous that avinash is not pinching them & all ... r u crazzy..?? I hav nthng against the actors..they r jst doing their job...!! n yupp... v hd watched BARUN SOBTI as ASR in IPKKND... so plzz stop these silly & jealouy commnts an all... itz soo pathetic...!!!