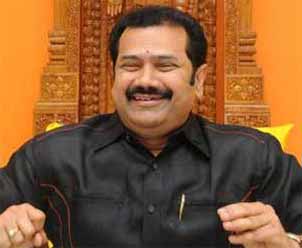 Popular Telugu writer Chinni Krishna, who turned 48 Thursday, said he is all set to wield the megaphone this year and wants to make films with superstars such as Mahesh Babu and Nandamuri Taraka Rama Rao (NTR).

"I want focus on direction this year. I have been asked to direct for a long time now but I just didn't feel the right time. I have 10 scripts ready and I plan to direct five of them and others can direct the rest. I want to direct superstars such as Mahesh Babu, NTR and Ram Charan," Krishna told IANS.

Known for writing successful films such as "Indra" and "Narasimha Naidu", Krishna wants to direct actor-turned-politician Chiranjeevi in his 150th film.

Chiranjeevi played the lead in "Indra", still considered one of the biggest hits in the career of the actor.

He feels the industry should encourage young writers.

"We always rely on a bunch of writers and make them write again. For instance, if a writer manages to score a hit, every producer wants to make a film with him when there is no guarantee that he can repeat success," said Krishna.

"We need to encourage young writers. We need to build a team of writers every few years and stop relying on the same ones. I have only done seven films in fifteen years so far. I don't jump into writing films after films," he added.

As writer, Chinni Krishna's last release was Telugu actioner "Genius", which was a disaster at the box-office.