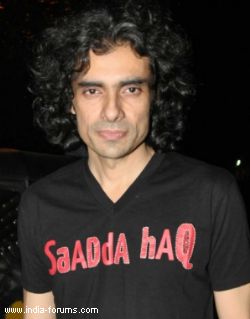 New Delhi, Nov 10 Bollywood filmmaker Imtiaz Ali will be the creative producer for the official Hindi remake of 2009 South Korean blockbuster 'My Girlfriend is an Agent' (MGIAA).

The 'Rockstar' director has collaborated with movie production major UTV Motion Pictures, who has acquired the remake rights of the romantic-action comedy.

'It is very exciting. It seems like full on fun - both the film and the making. A crazy, high energy no holds barred roller coaster with this highly huggable hero and highly hyper heroine. Most exciting for me is that Bosco is directing it. I don't think many people know how to put fun on screen like Bosco. And I'm there to add to the chaos and trouble PI Films and UTV at every step of the making,' Imtiaz said in a press statement.

'My Girlfriend is an Agent' is an endearing story of two spies, who have been assigned the mission to stop a Russian crime group from stealing an advanced chemical weapon.

'From the day our team at UTV saw MGIAA, we knew it was a film we just had to remake in Hindi. The characters of the two main leads are so endearing and the situations they find themselves in so hilarious, that it's the perfect recipe for an action rom-com! We showed the film to Imtiaz and he felt just the same. Getting Bosco on board to helm the project puts it in the perfect zone creatively and the whole team is now raring to go,' said Siddharth Roy Kapur, CEO of UTV Motion Pictures.