Highly talented actor Ashutosh Rana returns to the small screen after his ill fated Sarkaar Ki Duniya on Real. He is playing a very powerful man in Star Plus upcoming late night- show, Kaali- Ek Agnipariksha. Tellybuzz caught up with Ashutosh at the launch of press conference and spoke to him regarding the above show and his career in general. 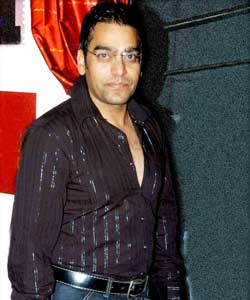 Can you talk a bit about your character in Kaali?
Thakraal is a man who enjoys money, muscle, people and political support. This unbridled power corrupts him and he wants to rule the world. He portrays himself as a good man, but is evil from inside just like many of our current leaders are. He will support anybody only till he/she is useful to him. You can call him a combination of modern day Raavan and Duryodhan.

Your character abuses woman what is your personal take on woman power?
I can't talk much about what Thakraal does with Rachna (lead girl), you better watch it yourself when it airs on Sept 13.

As for woman power, there is an old Hindi proverb which means that 'if a woman wants she can make your life heaven or make you go to heaven.'

We have heard that the show is based on Ruchika Gehotra abuse case?
Our story line is based on not one particular case but on several real life incidents. It is a comment on the current political and social scenario where you need to find the bad in the good.  For times, have now changed and you cannot really classify anybody as just black or white.

Why did you choose this role?
If you take a look at my career, I have always attempted to different characters, e.g .my rapist character in Dushman was poles apart from  Sangarash( Tantrik). I don't choose a character if it is positive or negative. It should have meat and it should take me ahead as an actor. My discretion in choosing roles has helped for often the media while trashing some of my films have said that Ashutosh Rana was good. At the same time, I agree that this reluctance to do more work has financial implications as well. I have to be happy with Audi while others roam around in Pajeros. But that is a personal choice and I am happy with it.

Are you happy with 11 pm slot is this slot because it has adult stuff?
No for by then most people will be free from all daily responsibilities and can watch the show with ease. And I don't think what our show is adult, for it reflects what happens in society. And the channel will anyways repeat it 2/3 times at slots as well. I wish to further point out that this time slot which till now has not been given enough respect is very good in the sense that large parts of non metro India which suffer from load shedding surely have power at this time of the night.

What is the USP of this show?
It is not a part of the kitchen conspiracy saga. Rather we have shown what happens on the streets with ordinary people. I am very sure that we will succeed as the public is tired of same old stuff.

But you never know what clicks with the audience and what does not?
Well if that happens the audience is at fault. They then can't blame the producers for not thinking out of the box. We will only give what you want right.

You have never distinguished between TV and films?
Yes I have always dabbled in both. Content is again the key in both. People still remember Tyaagi from Swaabhimaan. My dedication to do good work has paid off. I was given Sarkaar Ki Duniya , it was something completely unique. The mounting was huge. It is another matter that the show did not work due to channel issues. I also hosted the male vs female face off i.e. Baazi Kiski.

I have always made it a point to stay away from the mundane. Every year Colors asks me to be a part of Big Boss and they keep requesting till the slots are filled.

You have not been seen much on films?
Yes I have had 2 releases in the recent past Coffee House (Sakshi Tanwar) and Summer of 2007. The later was based on farmer suicides. The reason for not doing more work is that once you have done quality work you only want to raise the bar and not go backwards. I have a couple of other projects goings on but will discuss them at a later stage.

10 years ago This serial is really good!, My I'm so scared to see this man "THAKRAL"....I just love Rachna-Anu relationshipp...
And such serials should come up..Really appericiate the team for something new like KALI..But I have only cne complaint and thats with the time slot....Could have been better it it was telecasted daily b4 10pm!... mmmm...Nyways... keep going! Simply love that girl Rachna!!

10 years ago Ashutosh is a Great Actor. Kaali is a must watch for everyone, its a really really good show based on reality.

razmaverick 10 years ago kali is full of substance.......
Ashutosh rana simply rocks....
But i m afraid that people may develop soft corner towards thakral.....although we all hate rathore

10 years ago @mesrkk, I agree but DMG isn't superficial and Star One does have some pretty good shows it just lacks a dose of reality. It is deffo for the youth. I suggest you edit your comment and cut out the "babe" because believe , me girls don't ike it when random men call them that. Honest truth, I would've blown ages back.

10 years ago @dollie16...
I can't help but laugh at ur kiddish choice of serials......
u seem to be growing too slow....b'coz u hv'nt developed enough neurons to be able to see the merit of shows like pratigya & kali......
shows like DMG on starone are so superficial & mean that it is simply a waste of time to even comment on their meanness......
so keep watching that shit .... or better grow up babe...

10 years ago @dollie16, so feel free to watch Star One and not Kali or reality shows.
If you want fun then watch fun. So where does Kali come into this again?

+ 3
10 years ago we watch tv for some fun n entertainment not for watching reality... we always watch reality in our daily life.. i m not sayng tht reality shows r not gud but we need some fun in our life full of tensions..
star one is the best...

10 years ago Hey, this is a sweet surprise for me to see so many people appreciating the reality based shows like pratigya & kali.......so, its a healthy sign that we r past the age of shallow, mindless & mean saas bahu stuff....& we r finally having genuine audience who is sane & sensible......
PRATIGYA & KALI r definitely the best shows on TV today.....I personally like pratigya more b'coz of some light moments & funny stuff.....in comparison, kali is more serious.....
but again all credit goes to pratigya for breaking the jinx that only saas bahu stuff sells....
pratigya truly revived the legacy of some great shows of the past like 'tamas' & 'kakkaji kahin' ....
& kali is true successor to pratigya....

10 years ago I know Pratigya is definitely the best :)
I was just saying that Kali has the potential to reach Pratigya's heights. If they try their total best :p

shabiheraza 10 years ago @sourcandydrop
U r almost right when u say that this show is in the same league as pratigya.....i love this show and i m a big fan of ashutosh rana.......
But pratigya is definitely a cut above the rest because its entire cast is extremely talented and secondly it addresses a broader spectrum of social vices in an extremely beautiful manner......
Kali, on the other hand focuses on a specific issue and represents realistic cinema........
Both these shows are far superior to dirty saas bahu soaps.....
Still pratigya is the best