Avinash Mukherjee, better known by the audience as Jagdish, the cutest and youngest son-in-law in COLORS' Balika Vadhu, is not new to the industry. But he gained instant popularity only thru this show. Avinash was earlier seen in serials like Kahaani Kahaani Ghar Ki, Jasuben Jayantilal Joshi Ki Joint Family and Rajkumar Aaryan.The young handsome lad recently got the opportunity to walk the ramp with the sizzling Bollywood beauty, Katrina Kaif at the Lakme Fashion week.

In an interview with Telly Buzz, he gets upfront about his aspirations and Balika Vadhu. 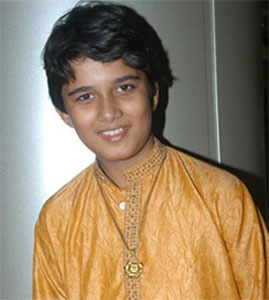 How did you bag the role of Jagdish?
I was doing a show for Sphere Origin, Rajkumar Aryan. The production team of Balika Vadhuu saw my performance and called me for an audition and I was selected for the role.

Balika has given you immense popularity? How do you handle it?
I knew right from the beginning that the show would be an instant hit. It feels really good when people call me Jagdish or Jagya. And it definitely feels good to be so popular amongst the audience. Everyone around me, my teachers, principal, friends, refer to me by my screen name. I know such immense popularity can be overwhelming, but I haven't changed due to it and hence can handle it with ease.

Who loves you most from the reel family?
It's my onscreen dadi. She pampers me a lot. The love that one sees on screen is much more off screen from dadisa. So in other words, it can be truly said that I'm the ladla of the house (grins).

You keep teasing your onscreen bidini Anandi? How is your off screen relation with Avika?
We are are very good friends off screen too. We study together and have fun on the sets when not shooting. She is just two months elder than me and sometimes I tease her that you can only dominate me if you were a year older; the gap of two months is nothing.

What have you been doing during the strike?
I watched all the episodes of Balika with the repeat telecast. I always watch the episodes of the show so that I can make a note of where I am going wrong and this way, improve my acting skills. I observe all the scenes and try and improve in areas like dialogues or body language.

Did you always want to become an actor?
Actually no. I always dreamt of becoming an astronaut. But my dad took me to the sets and explained to me all that goes into the making of a television show. He wanted me to experience it hands on and I did. Since then (the last 4 years), there was no looking back.

What have you learned from your dad?
He has taught me the correct way of acting. My dad is in this field since a long time now and he has taught me how to deliver dialogues, the proper body language, learning my lines from the script etc.

Are you eyeing Bollywood?
Of course, but that will happen only after I complete my college. I know one day I'll become bigger than Shah Rukh Khan, but like I said, there is still time for that to happen. Currently I'm happy doing Balika Vadhu; but if I get good offers for movies that are made for children, I would not mind doing them.

What do you like most about SRK?
He is my favorite actor and I like his acting. I also like Hrithik for his dancing and one day I will achieve that position too.

kavya.b 11 years ago arey wah
wat a confidence at this age

wish him allthe success in his life

fly2me 11 years ago he is so smart and confident!
best of luck for his future to him!

radhika_21 11 years ago he is soo confident!
wish him all the best 4 his future!
thanx!

Jenifer. 11 years ago wow, it''s so weird to hear such a young boy saying such adult-ish stuff! he''s has such aspirations...all the best to him and hopefully he can fullfill them! after all, srk did start off with television!

CeruleanSky 11 years ago @ everyone who seems to have taken offense at his I want to be bigger than Shah Rukh ... chill guys ....he''s a eleven year old...and SRK happens to be his fave actor...so is it wrong that he''s confident about being bigger than SRK ? Its only a statement of how much he likes him.... BTW , I am an absolute SRK FANATIC , and I havent seen anything wrong in Avi''s self-confidence...

*Reemz* 11 years ago He''s only a kid. So what if his aspiration is to be bigger than SRK? Thats cute.