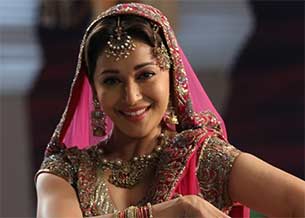 Actress Madhuri Dixit, who will be seen on the big screen after 2007 film "Aaja Nachle", says she chose to be part of "Dedh Ishqiya" because she has faith in the makers of the film - Vishal Bharadwaj and Abhishek Chaubey.

After the success of 2010 movie "Ishqiya", director Chaubey teamed up with filmmaker Vishal Bhardwaj, who has produced "Dedh Ishqiya".

"I didn't wait for seven years for the script. I have my reasons. I was not even living here before. I was staying abroad so to come here and work and go back was getting very tedious," Madhuri told IANS.

"That was one of the reasons I didn't do anything, but when I decided to come to India and settle here, that time I decided to read scripts and 'Dedh Ishqiya' was offered. I was confident that Vishal and Abhishek team makes good films and I would love to be part of it," she added.