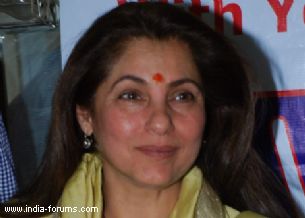 Veteran actress Dimple Kapadia, whose forthcoming film is the quirky comedy "What The Fish", hopes that the audience accepts her in a comic avatar.

"I loved doing a role in movie that demands such high level of humour. I hope the audiences accept and like me doing comedy for a change," said the actress, known for her work in movies like "Bobby", "Saagar", "Rudaali" and "Dil Chahta Hai".

The 56-year-old launched the trailer of "What The Fish" here Tuesday along with the film's director Gurmmeet Singh.

She had donned a new avatar for the event. She wore a cotton sari, peculiar glasses, and even carried a fish bowl with her, looking rather strict much like her character in the movie.

Co-produced by Viacom 18 Motion Pictures, the film is set to release Dec 13.

Dimple plays the role of a grumpy woman named Sudha Mishra, who has to leave her house and her beloved fish (Mishti) in the hands of her niece's fiance, whom she detests. What follows is a series of hilarious incidents as the house is passed one after the other to varied colorful characters of the movie.

The director says he cast Dimple for the role as she fits into it perfectly.

"When I wrote the script, I never thought it would be Dimple-ji I would cast as the main character lead. But when the script was over, she fit in perfectly well. Working with her was delightful; she was the only kid on the sets of the movie," he said.

Talking about the film and its unusual title, he said: "It has so much chaos that it made complete sense to call it 'What The Fish'."

From Sid, Bunny to Ved, Barfi: Life Lessons that Ranbir ...
46 minutes ago