Manasi Parekh is an actor who is not seen frequently on television screens but has been associated with shows wherein she has brought out a difference in each character. Like always this time too she portrays the role of a young and chirpy girl Gulaal, who carrys some extraordinary powers. In other words, the girl is at it again in a role that people never saw her do. 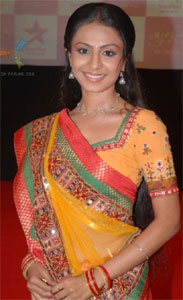 Tellybuzz had a chat with the talented actress where she shared her experiences in the show and also the reason for taking a break.

What made you accept Gulaal?
There have been offers coming my way, but nothing interested me because all roles were similar to the ones l had already done. I believed that I rather wait for the right show rather than work without a heart into it. But when Gulaal came to me, I realized it was completely different from the ones I had done before. The stars and the director are superb and the scope is vast which made no reasons for me to say no.

You have been away from Television for a while; what have you been doing?
I actually prepared myself well during this time, I had been to US where I did a four months course at Lee Strasberg Theatre and film Institute after which I did an English play with Lillete Dubey called Bride Candle. Then I anchored the show with Karan Singh Grover and recently I completed the moview called Yeh Kaisi Life with Yudhishtir.

Can you tell us something about the movie?
The movie is about a doctor patient relationship wherein I play the doctor and Yudi is the patient who comes in contact with her after a severe injury that he suffers. He plays the character of a contract killer and after the incident the doctor helps him live his life and make him realize that life is too short to regret.

In the show you are portraying the title role, how do you feel?
It has been thrilling, because I could see my posters everywhere, but at the same time there is a big responsibility on me as I am the face of a show which has other senior actors in it. And I have to make sure that every single aspect of the show is taken care of. But as of now the responses have been extremely good and I get messages, calls and fan mails every day appreciating my work.

What is so unique about the show that makes it look like a movie quality?
This is the first time in television that a show is been shot in 16:9 format with a high definition camera. This is done to give the visual impact of the set up and create the world in a much higher prospect where the cameraperson Sanjay K Memane is doing a brilliant job.

Gulaal has a star cast that is very talented and all are thorough professionals; how is the experience?
It is amazing because even the smallest things in the show turns out to be a learning experience and this is an added layer with which the depth rises.

What was the most memorable experience in the show?
Every scene from the show is dramatic but one of the most memorable is the one where I am slapping Lakha after I realize that I am gifted. In that scene there are emotions layering one by one on top of the other. Because it wasn't just about the girl, but she is in love with the boy with whom she is angry now. In that anger she slaps the boy which she didn't want to do but she actually did. The emotions were really complex there.

A sporty girl in four, a sweet innocent girl in India Calling, a daring gaon ki gori in Gulaal, how has the journey been till now?
I am just thankful to God that I got a chance to experiment with the roles that came my way. I have not done too many roles but people still remember the roles that I have done. I never wanted to do Saas Bahu type shows and Gulaal is like the cherry on the top.

Which role of yours has a close association with you?
Every role that I did had some or the other traits of me in it, because as an actor I had always tried to find myself in the character to get into the skin of it. The closest would be the ones I played in India Calling and Gulaal.

Have you ever thought about you having a sense like how Gulaal is having?
All of us have a sixth sense in ourselves which is there in the subconscious mind and I feel that I have the sense of intuition. But if there could be a power which I could choose for me, then I would like to have the power of freezing time.

You are also associated with ads, what do you enjoy more?
Ads are less stressful and fun to do because it is just one or two days of work where you get paid well and through ads I got a chance to work with film directors like Pradeep Sarkar .

Parthiv Gohil's role in your life?
He is extremely supportive and is my pillar and strength and without him I would not be able to do anything. Even under stressful work, he understands me very well and also at the same time even I make it sure that I do manage the house.

What preparations did you make for the role Gulaal?
In this show I am playing a village girl and hence I had to work on the body language, the way they talk and walk. I watched various documentaries and read books and that's when I came to know that there are people who really have the power to sense water beneath the ground. The concept is called water divinity. That is somebody is gifted to sense the water.

Rahil Azam has said that if he was the jury member in the television awards he would give you the best actress award and he would buy it for you if you don't get it. How is the experience acting with him?
I really hope he becomes a member in the jury (laughs) but fun aside, he himself is a brilliant actor and a very rare actor who has dedicated his full hundred percent to this profession.  I am glad to get a comment like that from an actor like him.

Message to your fans
I would like to tell them to please watch the show because it has a beautiful story attached to it and also I would like to give the message that life is really short to sit and regret for sorrows, so just enjoy it.

-Premeena- 9 years ago i hope raahil comes back both looked awesome.. thanx for the article..!!

Deepika Padukone Arrives at NCB, to be Questioned over ...
31 minutes ago

After Ten Months Jacqueline Fernandez has Finally Re-united ...
13 hours ago