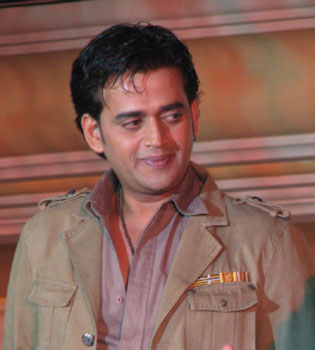 Featured Video
Why did you choose to anchor Ek Se Badkar Ek?
I was caught up with shooting for my movies and was doing the same thing the whole year round. Right now, I am saturated with what I am doing and want to try my hand at something different. I think this a great opportunity for me to unwind. I can be very impromptu in what I say and don’t have to follow a script. Also, I am getting an opportunity to interact with new talents. The concept of the show is different and that is what appealed me the most.

Of late, you are seen anchoring and judging shows on television. Does this indicate a time out from Bhojpuri films for you?
I can never betray my language and that too a platform that has given me everything. I can never say no to Bhojpuri films just because I am busy doing Hindi films or television. If I do that then I am cheater and a fraud.

On one hand we have the two Khans of Bollywood hosting on television and now two Bhojpuri actors in you and Manoj Tiwari. Do you think you face tough competition from either of them?
Which world are you in? I am very confident that my show is going to do well. The craze for this show has already started. And above all, I do not consider anyone as competition.

Bhojpuri films have seemed to make a mark for themselves in the industry. What do you have to say about this increasing popularity of the films as well as the stars?
Bhojpuri films have definitely made a mark. When I started as an actor, there was nothing big there. In fact, I was the first one to take a step forward. I wish to see Bhojpuri films at the level of Tamil and Telugu films. I have acted in 75 movies in the last six years of which 9 have completed silver jubilees and 5 golden jubilees. I want to give an opportunity to all so that they earn and live happily.

So do you dance and sing in real life too?
Well, I love doing both. I am a trained dancer but a horrible singer. I have learnt a dance form called Chau and have performed in my movies too. I would not say I am as good a dancer as Hrithik Roshan, but yes, I too can dance well.

On the Dias you said that singing, dancing and cricket really rules, do you feel the same or you said it just for the sake of saying it?
Ya, I truly believe in what I said. I feel that for us cinema and cricket are food of entertainment and no one can deny that.

You have been part of two reality shows now. So tell us how much is really real in such shows?
To tell you frankly, the reality shows I have been part of have never given me a though that something there was not real. I don’t listen to anyone and no one can force me to do something. I am a stubborn person and will do whatever I like. I think today I have everything whether it is power, money, name or fame I don’t want anything because of which I should listen to anyone. I consider myself as a ticket-seller as the tickets sell on my name.

You are so popular that you have your stamps in Netherlands?
There has already been a lot of controversy over it. So I won’t like to create some more by talking on it. So no comments please…

You will also be seen anchoring the Season 2 of Big Boss, so when is that starting?
I won’t be able to divulge details of Big Boss at the moment, but it will be in this year as Ek Se Badhkar Ek is just for twenty weeks. Once I am done with this, I will take a direct leap to Big Boss.

chanel 14 years ago There are no stamps of any Indian whatsoever in the Netherlands. Ravi Kissen could have said:NO!!!!because he knows it's NOT true. Even the hindustani people here in the Netherlands do not know who is Ravi Kissen. He is an arrogant man (he's answer and saw him in Sony's Bigg Boss.

Mundakamal 14 years ago what he thinks of himself??? passing vulgar comments on girl participants while anchoring...too loud and rustic...will affect the show negatively...

14 years ago I didnt like his anchoring....hope it gets better soon!!