Bhavya Pandit, one of the better known faces of Indian Idol 4 was voted out last week. Telly Buzz caught up with this cute Mumbaikar to find out more. 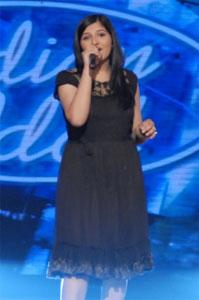 What went wrong?
In a way, I am relieved as I was repeatedly landing in the danger zone, and the emotional stress was taking a toll on me. Having said this, I was not in the bottom three in the last two rounds, so this result is really surprising!! I would be wrong if I said that I would not have wanted to go ahead, but then this was bound to happen.

The top five include contestants from distinct regions which have strong vote banks. And I come from Mumbai where people just don't vote. And despite that I have reached so far, shows that people all over have shown their faith in me.

Is regional voting wrong?
No, you really cannot blame people for supporting someone from their own area. Such sympathies are bound to occur.

Who would you now want to be crowned Indian Idol?
I would really root for Saurabhee, as she is a great performer. Even Rajdeep is a superb singer. I hope that they both make it to the top two, and one of them becomes Indian Idol.

What are you taking home from Idol?
A lot of positive memories for sure!! Idol has given me the recognition, name and fame. I have really improved as a singer and a performer. As for the future, I will work hard for live shows and recordings. Anyway it's always said what really matters is how you use this platform later on. So let's see!!

Good you mentioned this point, most reality show contestants disappear in the oblivion?
No, many of them do concerts, but they never get featured in the media. As for playback, that's a different zone where you have to compete with existing greats. Having said that, some reality show participants like Amit Paul have got a chance in 'Luck By Chance' and Monali Thakur even has sung in 'Race'.

Also you have to understand that every year a large number of singers come out of such shows, so you cannot expect all of them to make the cut.  There is a combination of luck and talent which takes you ahead.

Your take on X factor?
Many people feel X factor is glam and style, but I disagree. According to me, anything which goes beyond throwing and pitching is X factor. Its the overall package, the expression and other stuff what you aim for.

However, if you only want to do playback, then it is just the singing that matters. But these days you also have to be a performer as there is a need to connect with the audience.

If in the future, you do cut your album and feature in your video, would you take a glam doll avatar?
No I think the public recognized me as a girl next door and I will stick to that.

Your take on judges?
All the judges have been very supportive especially Annuji.   Having said that,  I have got superlative comments from all of them.

Come clean about your equation with Torsha..
We never were the best of friends. But ever since we have become roomies, we are very good with each other. There is no issue there.

~*evil zanny*~ 11 years ago aww she got out... she was my fav...
but i hope torsha and rajdeep reach top 2 and rajdeep becomes the idol...
and it was reli sweet how rajdeep was crying when she was voted out... :)

Parachute. 11 years ago Definitely true...Mumbaikers cannot be bothered...I can vouch for that :P

yipee 11 years ago really nice interview...all the best to her for her future

-SanzAngel- 11 years ago oh shes out ...oh no
i like her
shes talented

wejay 11 years ago From time voting has started, never have these reality show winners got good playback singing opportunity. Most of the time the most unwanted gets to b the winner while the talented gets out of the race. I seriously wonder who are those ppl who r aready spend 6Rs per SMS to make some unknown person win and give them the crown. Such a stupid system

-Akanksha- 11 years ago It''s true, the ones from Mumbai don''t get votes :( Surprisingly Vaishali won srgmp, otherwise normally it doesn''t happen that way

Reshabh 11 years ago thats very much true , afetr abhijit sawant people of mumbai had stopped voting in almost all the reality shows.It was exeptional this time @ saregamapa ,but himesh''s rock gharana won , i m happy.... Plz Mumbai vote for we people , Aamchi Mumbai people, where people from other states are getting popularity .Time will come that we mumbaikars will be takenover by the other people and our talents will not be contibuted .....Jago Mumbai........

babe23 11 years ago thats not true....saregama winner was frm mumbai..tht too a girl