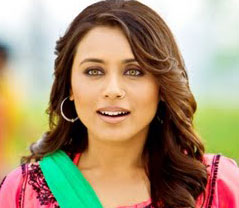 She took tips from Shah Rukh Khan to understand cricket for her role in 'Dil Bole Hadippa', but Rani Mukerji has no intention of following her good friend's footsteps by bidding for an Indian Premier League (IPL) team.

'I can't afford it... I don't have so much money. There is no chance that I can buy an IPL team,' Rani told IANS in an interview here.

'Right now I don't even think that I can take up so much responsibility because everything of that sort (owning a team, etc) means more responsibilities. I am quite happy doing what I am doing right now,' she added.

Salman Khan too is reportedly going to bid for a team this year.

Leave alone IPL, Rani says a big 'no-no' to venturing into other facets of filmmaking, such as production or direction, like some of her superstar colleagues.

'Again with production comes a very big responsibility and so is with direction and I don't think I am ready for that as of now,' she said.

What's on her mind right now is having a blast during the ongoing Durga Puja.

'I am just hoping I can have a great time with my family and celebrate Durga Puja as I used to celebrate it as a kid. This time luckily I have kept no commitments during that time; so I am just hoping that this year I'll have a blast,' Rani said.

Asked if she had any plans of visiting Kolkata for pandal hopping, the actress said: 'I'll be in Mumbai... I always celebrate Durga Pujo in Mumbai only.'

Unlike other A-list actresses, Rani is not brand conscious when it comes to her wardrobe. And she has no brand preferences either.

'There's nothing special...basically I love wearing good clothes. I walk into a shop and I buy anything I feel I'll look good in. In any case, having a toned body always feels great.'

Her latest outing 'Dil Bole Hadippa!' may have got mixed responses from both audiences and critics, but that has not deterred the actress's confidence.

'I have always done different things. I've done a 'Black' that somebody would think twice before doing and now this ('...Hadippa!)... I take up challenging roles as that really excites me as an actor.

'For me it's very integral that I choose a character which is special for the audience as well as me,' Rani said.