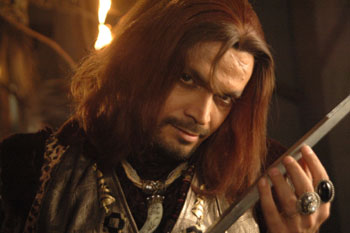 Featured Video
Did you do a study before you played the character of Ghori?

For around 2 -3 months, I studied the historical condition that was prevalent in that time. I think I have done my basic groundwork well.

Did you always want to be a star as we have heard that you shifted grounds?

I have done my engineering, but I was doing theatre since standard tenth. I did engineering, as the class timing were suitable for my theatre. I also have my own theatre group. I take classes in Anupam Kher’s institute also. But at the end of it all, I always wanted to be an actor.

What do you think would have happened if Prithvi Raj would have been successful in defeating Ghori?

I think, Ghori would have attacked again because Muhammad Ghazni before Ghori had attacked India 17 times. He was also from . Ghori once said that war is like a game and I will play to win.

I think I am very different from Ghori .To give you a clear idea of what kind of a person I am I would like to quote here, ‘ I can do anything to win, even fail’. Basically Ghori did everything with a materialistic view point, where as for me I believe that even if I am failing somewhere, I am winning hearts. In that way I am very different.

In the day to day shooting schedule on the sets, what do you find as the most difficult/challenging thing to carry out?

The more it is difficult the more you enjoy. I feel it’s like a game, unless it is difficult you do not get the satisfaction of winning. We have to cope up with the weather condition and work for 24 hours. I feel this is my job and I have no problems about that.

Ghori is portrayed as a villain and a very sadistic one. Do you think you would get type-cast into villain-based roles in future?

I think I am playing it very positively. I don’t scare people by shouting. The outcome is sometimes negative for the audience, I don't deny that.

What do you feel about playing the role of a villain, who was basically considered as a traitor/invader against ?

Considering the conditions at that time everybody was invading. It was like if I am more powerful then I will start a fight. If the opposition is successful in killing me, then I am ready to surrender. In people still believe in guerilla fighting. I believe there are two ways of fighting –Rama’s way and Krishna’s way. In Rama’s way outcome is not important .To achieve your goal, you just need to follow the right path. But in ’s way, the end result is very important.

When I am Ghori, I follow ’s way but off the sets as a person, I follow Rama’s way. That’s why I say, I can do anything to win, even fail.

Tell us about your off-screen activities on the sets..

I think the off-screen chemistry with all actors is wonderful. We all celebrate birthdays and even play games like cricket, not just for the game but also to burn calories.

bindasbala 14 years ago irfan hossein is a film material.he is doing a great job.where can we find his real pics.

14 years ago But in Krishna’s way, the end result is very important.

where did he come up with that from? It is Krishna who said in the Geeta that Karm kiye ja, phal ki chinta mat kar

salmanansari 14 years ago shukria,
he is wonderful,please post some of his real pics.from the day one i like his acting.
thanks

+ 3
14 years ago cool!
thanks for sharing
he plays the role of ghori pretty well