Shubhangi Atre is pretty livid with the day-in-day-out speculations made my media whether she is in Kasturi or not!! 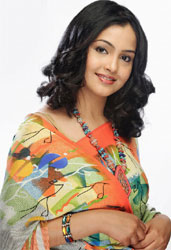 Featured Video
“I was shocked to read yet another story yesterday which had the headlines ‘Shubhangi out of Kasturi’. I wonder from where such news is spread. As I told Telly Buzz few days back, I am very much part of Kasturi and I am shooting daily”, retorts the actress. Ask her about her quotes in the story wherein she said she is moving on, Shubhangi states, “I have never given such quotes to anyone. The story also said that I don’t allow my co-stars to get close with Ekta Kapoor, and this is completely false”.

The pretty actress hardly speaks to the media and does not like being publicized. “But this ‘Am I in or out??’ debate is irking me to a great extent now”, expresses she.

Though she remained tight-lipped about the future track of Kasturi where she is back to normalcy after playing a mentally challenged role for a while, the actress shared her delight on being part of the Sahara One show Saas V/s Bahu. “I enjoyed being part of the show, where I supported Prriya Arya. My solo song on ‘Salaam-E-Ishq’ was liked by all. But my duet with Prriya did not go well with the judges. But overall, it was a memorable experience”, quips the actress.

12 years ago im happy that Shubhangi is back now in DHKJ..

14 years ago finally its set..shes staying..i was soo confused weather or not i should beleive thr rumours or not

14 years ago if shubhangi will not stay in kasturi then no 1 will watch kasturi . that is the most enportint part of kasturi : robbie (karan) & kasturi ( shubhangi )

now hope these ppl can rest ...... happy that she's very much there on the show

14 years ago thanks for the news ,i hope now no more such rumours air