Farah Khan, who makes her acting debut with 'Shirin Farhad Ki Toh Nikal Padi', says she was completely shocked when she was offered the role of Shirin in Bela Bhansali Sehgal's directorial debut.

'It was not a conscious decision. I thought Bela and Sanjay 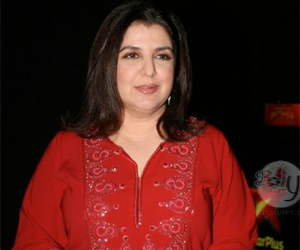 (Bhansali) wanted me to choreograph a song. But when they gave me the script, I almost fainted,' Farah, a choreographer-turned-director-turned-actor, told reporters at the unveiling of the first look of the film Wednesday.

Co-produuced by Eros International and Bhansali Productions, the film will see Farah and Boman Irani as the lead pair.

'For almost a week I thought they were joking. When they told me it had Boman, half the job was done,' she added.

Talking about the genre of the film, Farah insisted that it is not just a comedy, but a mixture of all emotions.

'...At the end of the climax, you will be crying. There is a lot of emotion. Every time Boman makes that last speech to me, I cry...It has everything in it,' she said.

Farah is happy to make her debut with Bela's directorial venture.

'I am so happy that I have made my (acting) debut with a woman director. This makes it so much easier. As much as I am a control freak, I gave complete control to Bela...We would improvise and ask Bela if I could do something or wear something, but other than that, I was an actress,' said Farah, who has directed films like 'Main Hoon Na' and 'Om Shanti Om'.

Acting was not easy for Farah and she added: 'I was very scared of my own reaction because I was over critical of the movie and myself. When I saw the film, it was like a lot of weight was off me,' she added.

But Bela is delighted with Farah's work.

'Farah really suited the character. She played it so well that I don't think anyone else could have done it. She is a born actress,' she said.

Bela says that she conceptualised the movie about eight years ago and that is inspired by a real life story.

'I had thought of the movie eight years ago and I wanted Boman and Farah only. And after eight years we made this film,' she said.