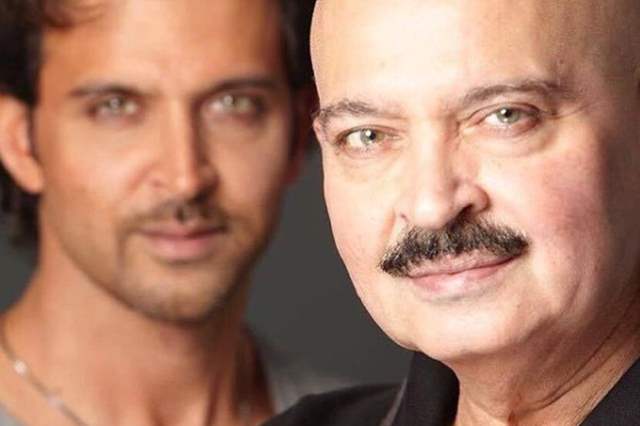 Today marks actor Hrithik Roshan's 47th birthday and needless to say, everybody has been pouring in with their wishes. Multiple celebrities and loved ones have wished Roshan on his birthday and it continues to go on. However, there is nothing like family and doting father Rakesh Roshan had something special to say and share about his son.

Talking to SpotboyE, he first reminisced little-known anecdotes, "“Hrithik was just 9 when he did my father-in-law’s film Bhagwan Dada. Hrithik was not supposed to do the film. But the child actor who had a pivotal role with Rajnikanth fell ill. My father-in-law director J OmPrakash insisted, ‘Let’s take Duggu.’ I was against the idea. ‘Daddy, Duggu can’t act!’ I protested. I wanted Hrithik to focus on his studies. We’d have never known there was  a brilliant actor lurking in him if my father-in-law had not insisted."

Roshan said junior Roshan had already decided to be an actor but father wanted him to finish his studies first, “As per our deal Hrithik came to me after his studies and said he wanted to assist me. I took him on as an assistant for 5 of my films. I told him I won’t launch him until he was 24. He joined acting classes and would come home and act out dramatic scenes, like Raj Kapoor’s scene with Lalita Pawar in Hrishikesh Mukherjee’s Anari.The way he did that scene, I was highly impressed. That’s when the idea for Kaho Na...Pyar Hai came to my mind. I knew what he was capable of, so I told a big step for him. I cast him in a double role. I knew he could carry it off. I didn’t take Hrithik in Kaho Na...Pyar Hai because he was my son. I took him because he was a potential star. To this day I work with him because I know what he’s worth and not because he is my son.”

He added, how they are still friends, “We’re very close. And yes ,we’re friends. But there is still that respect in him for me .He can never cross the line. If I enter a room while he is relaxing  he will spring to his feet.” An emotional Roshan said, “He can work with outside directors.But I’d never work with any other actor, unless I am making an out-and-out heroine-oriented film like Khoon Bhari Maang. I might be tempted to make a film with a female protagonist. But only  if Hrithik is too busy to work with me. When I was an actor I could feel a filmmaker lurking within me. But I was never satisfied as an actor. I had a big hit like KaamChor .But that helped Jaya Prada’s career, not mine. I knew God wanted me to be a director.Now I feel Hrithik who is such a successful actor, far more than I ever could be,  has a filmmaker lurking within him. He will hundred percent direct a film some day.Mark my  words, he’ll be a very fine director.I am sure of that.He may not be a good producer, but he’ll be a terrific director.”

He even said that he is looking forward to launching his grandsons as heroes, “Provided they want to be in films.I’d love to launch them. My blessings are with Hrithik. Whatever he does in life my wife and I want him to never change. He’s kind , helpful generous. He deserves happiness.”