The 3rd episode on Bigg Boss to be aired on 19th August begins with housemates having insomnia as none of them have slept the entire night as the task was to sleep in total of 100 hours till Wednesday. They all decide to sleep and wake up in some time and then continue with their task. 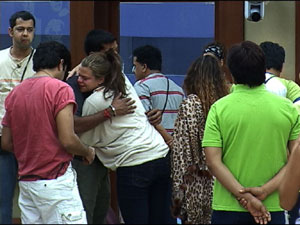 Featured Video
The first alarm rings to wake them up but no one wakes up. At the second alarm the first housemate to wake up is Ketki Dave and is shocked to see everybody sleeping…At the third alarm all the housemates wake up..

Further in the episode all of them are sitting together and Raja tells Aashutosh teasingly to teach Jade Hindi. He starts with A for Aloo, B for Bhaloo and further on... and amusingly Jade actually tries it...

Further the housemates come to know that Jade is constipated and has not been to the loo since four days…They all give their suggestions on what she should do to relieve herself and in the process Rahul, Debojit, Alina try to teach her the Indian style of using the loo by squatting.

After some time Jade starts crying because she is missing her children. Monika consoles her and tries to calm her down. Further in the episode Jade finds out that she is suffering from Cancer (Only yesterday, the results of Jade's test were out, conducted in UK before her departure to India),  and then Bigg Boss decides to bid her good bye and wishes her that she recovers well.

Payal looks in the camera and wishes her mom "Happy Birthday".

+ 2
14 years ago why is it not coming on sony channel....i am not getting this new channel colours

+ 2
14 years ago jade was trying so hard but this news must really shock her...all the best jade and my prayers are with you and your family

14 years ago That was bad..i wanted her to say longer...i would miss her..get well soon jade

14 years ago This is very sad..i hope she gets well soon

+ 2
14 years ago This is really sad! I hope she can recover and has a safe recovery.