Anita Hassanandani is a popular face in the television industry. But the talented actress has been away from the limelight lately. But least did we know that she was all set make her comeback with an entirely different show with a talented director.

Anita is back with Anhoniyon ka Andhera, the horror show in Colors, directed by the talented Bollywood director Vikram Bhatt. 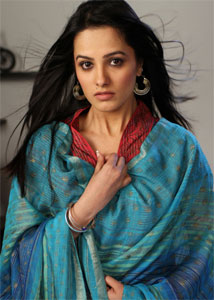 In a conversation with Telly Buzz, Anita shares her experience being part of the show and she tells whether she really had any spooky instances while shooting.

How did the show happen to you?
Actually I was planning to come back into action, but was waiting for some good opportunity to come my way. And Vikram Bhatt's timing of approach was perfect as even I wanted to make a comeback. Apart from that the role was challenging for me. It is a performance oriented role which has various emotions to play and I am very much excited to essay various shades in the show. Actually Anahita has a lot to do with the character.

What is the show all about?
The show is basically horror on weekly basis with a little bit of family emotional base. But the initial few episodes of the show change the situations when the lead girl encounters with a few super natural and paranormal situations. After few instances it will be revealed that the girl has the power to detect ghosts and similar super natural powers. Though initially she gets scared with the incidents, later on she uses the power to detect the ghost and help those people who are exhausted with their problems. Eventually she goes against her family and fights against the supernatural power.

Could you please tell something about the character?
I will be essaying the character of a normal simple girl named Anahita, who is happily married and a very practical, working woman. She has nothing to do with ghosts and super natural powers initially. But later on when she realizes that she has some paranormal powers of detecting ghosts and super natural powers, she fights against the powers and helps the needy people.

Can we name the show as an inspiration of Sixth Sense as the promo says you can see them?
I really cant say that the show is inspired by the movie because as per the promos, I can see, sense and be with ghosts. But I don't think it has been inspired by anything.

What is your personal opinion on such supernatural elements?
I never agreed to the existence of such super natural powers. But after shooting for the show where the episodes were based on real life instances and after listening to the real life stories by Vikram Bhatt himself, I got to understand that such powers do exist in the world.

Has there been any instance where you heard or felt about such powers?
No there was no such instances that we felt, but the ambiance on the sets made us feel scared. And once I remember we were shooting an episode out of Mumbai and it was so scary to be shot. But on the other hand I enjoyed the feeling as it is part and parcel of my work.

What made you decide to take up the show?
There were many such points for taking up the show. Firstly, its a genre like horror, secondly it is because of Vikram Bhatt, who is very much into this genre and thirdly because of the brilliant role which I am essaying.

This is the first show by Vikram Bhatt in the television industry, how has  the experience been till date?
The experience has been great and talking about Vikram Bhatt, he is a brilliant make,r a very dedicated person and knows his work. What more does an actor need to essay a brilliant role in the show.

Can we call this your comeback?
Yes, absolutely its my comeback with a great channel as, after doing Khatron Ke Khiladi and Dancing Queen, I always wanted to do something different and wanted to remain away from saas bahu saga. So horror as a genre is in fact a perfect comeback for me.

What are the changes that you observed in the industry after your return?
Nothing has changed, in fact I feel like the industry is welcoming me again.

A memorable incident..
Actually there was an incident that I would like to share. Once during the shoot there was a sequence when a horribly looking hand had to appear from below the bed. And the atmosphere around me was made so scary, that while shooting, when the hand came out I got so scared that I literally screamed and it was terribly a horrifying experience for me.

Any messages to your fans
Guys its a brilliant horror show which is nearly inspired by real life incidents, and I promise real horror from the show.

-PD- 9 years ago All the best Anitha... its good to see you back

4rosegirl1 9 years ago reminds me of ghost whisperer. i used to love tht show.

-Hoor- 9 years ago Aww, miss you anita!
Kavyanjali was a saga =)

Usman. 9 years ago glad to see her interviews... yaa the serial is awesome loving it already..

-MariaMars- 9 years ago Miss u anita.. come back soon.. hoping to see u with eijaz...

Before Death, SP Balasubrahmanyam Has Sung For Upcoming ...
11 minutes ago

Sushant's Family Displeased With Attention Being Diverted ...
13 minutes ago

After Ten Months Jacqueline Fernandez has Finally Re-united ...
23 minutes ago

Kangana Slams Anushka for Raising her Voice Against ...
50 minutes ago

'RadhaKrishn' Fame Vaidehi Nair Roped in For 'Brahmarakshas ...
55 minutes ago