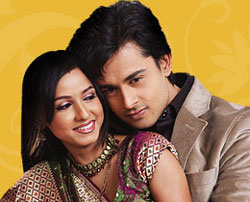 Featured Video
According to our source, "With the track of Purani Khoti getting over, the Raghuvanshi family get back home, and plan to send Shree and Hari to Lonavla for honeymoon. As the couple is all set to go on a joyous trip, there enters into the house, Sarla Ben the new servant who is actually Putli Bai, Kangana's mother in disguise".

As reported earlier, Nimisha Vakharia will play Putli Bai. We had also written earlier that there will soon be a death in the family. "Jigna Ben, the servant in the Raghuvanshi family will be killed by Putli Bai. However, the family is not aware of her death and believes that she has gone to her village, and Jigna in turn has sent Sarla Ben (Putli Bai) into the household as a temporary replacement till she gets back".

Putli Bai once into the house will activate all the evil powers, and there will arise many problems in the family. "Shree and Hari who take off to Lonavla will indeed have lots of hiccups, and their pleasant trip will turn sour. There is also an accident sequence being planned during the course of the trip, but nothing is clear as of now", adds our source.

The story will now focus on Putli Bai trying to get a strong hold on the family. Also, the track will steadily progress towards the re-entry of Kangana, which will take place after 25-30 episodes. "Mangda Ben's character essayed by Tanaz Currim is stipulated to end soon. However, the production house plans to extend her character, as they have got good reviews for the character of Mangda Ben who has been a solid support system for Shree in her bad times", states our source.

Nimisha Vakharia will enter into the Raghuvanshi house coming Monday, and this will mark the start of a new chapter in Shree's life..

+ 2
13 years ago They shud take a brk from the current kangana and her mothers track and just concentrate on Shree and Hari... let them enjoy a little bit... Dey are goin 4 der honeymoon and the creatives are planning on ruining it.

13 years ago please somebody tell me how kangana died??

+ 4
13 years ago It would be LOVELY to see Hari and Shree's romantic scenes. But it would be really sad for them to have a ruined honeymoon. Wish them a HAPPY LIFE someday.

+ 6
13 years ago Putli Bai looks really scary.Hope Shree and Hari will have some romantic moments.

+ 6
13 years ago ohh would Hari and Shree live a happy life?

and yes tanaaz's character is really sweet, she must stay for some more time

+ 7
13 years ago the show must keep her please don't let her go.really like her raghuvanshi house is enough big please let her stay.not happy with kangana returning back.the sun is brightning in the life of hari n shree that really good news.