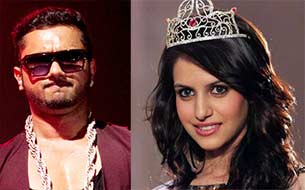 Rapper-composer Yo Yo Honey Singh, who is currently exploring the West for musical opportunities, will be composing and recording a song for Femina Miss India 2014 Koyal Rana.

The "Blue Eyes" hitmaker has been roped in to shoot a music video with Koyal.

"That is a commitment I made before my current paschim-yatra (westside journey) started. I was a judge at the Miss India pageant and after the winner was selected I'm doing a song and music video with her," he said.

Honey Singh's song for Miss India would be his only original track in recent times.

"Even the song that I did for Sanjay Leeela Bhansali's 'Gabbar' is an old number. But working with Bhansali was a dream come true," he said.

Honey Singh has written a rap number about his new association with Bhansali.

"When I was a child, I saw the Ram Leela performed on stage. Now, there is the film 'Ram Leela' ('Goliyon Ki Raasleela Ram-Leela') and its maker actually wanted me to do a song for Akshay Kumar in 'Gabbar'. Akshay was one of the first Bollywood A-listers to believe in me. We gelled before we jammed together," he said.

For now, there is only the song with Koyal.

Apparently, the number that he plans with her would be completely cleaned out. It would not have any hint of naughtiness, not even one suggestive word.