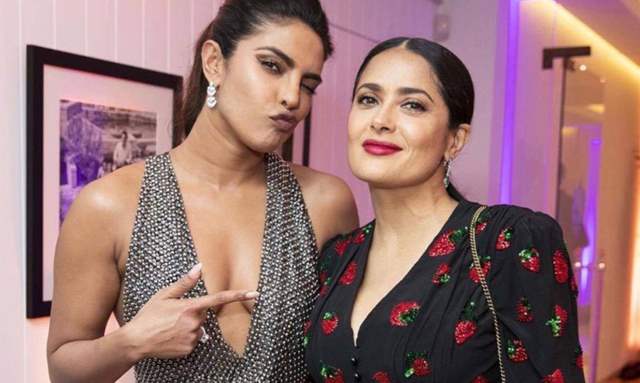 International star Priyanka Chopra has been drawing appreciation from all quarters. The actress who is heavily praised for her performance knows how to choose a film that will impress the audience. Now, she has yet again received appreciation from Hollywood actress Salma Hayek.

Salma Hayek was all praise for Priyanka's Oscar-nominated film ‘The White Tiger’, and for the ease with which non-American actors work. She will soon be seen in Marvel's Eternals, directed by Chloe Zhao and co-starring Indian character actor Harish Patel.

For the uninitiated, Hayek is arguably one of the most notable Mexican figures in Hollywood today. She is known for her performance in the 2002 film ‘Frida’ that received her a nomination for the ‘Best Actress Academy Award’.

Speaking to Vogue India magazine, Salma briefed how she had to keep her Marvel job a secret from her co-stars Ryan Reynolds and Samuel L Jackson, and the film that she enjoyed recently.

During her interview, she admitted how streaming platforms 'take more risks' sometimes - in regards to the content - and called Priyanka Chopra’s film ‘different’.

"But how many original films have you seen coming from America that made you go, 'Oh, that's different?' Actually, there was an Indian film I really liked, with Priyanka Chopra, The White Tiger. Now that was different."

Salma also highlighted the difference in working with American and non-American actors, especially on Eternals. Noting the differences, she mentioned, "The American actors are great, but they don't have the custom of going out to dinner. They like to go to bed early, to be at the gym at six in the morning. When you're Mexican or Indian, you hang out, you finish your meal, you keep talking, and you keep talking. I felt at home.”

To note, global star Priyanka Chopra has been an inspiration to many artists, and the stories of her struggle have encouraged others to cross the hurdles. The actress was heavily praised for the release of her last film ‘The White Tiger’ which received appreciation from critics as well.

Meanwhile, her sister Parineeti Chopra has also been drawing inspiration from the global star. Priyanka and Parineeti are cousins who are extremely close to each other. Years ago, Parineeti had even worked as an intern with Priyanka’s PR team.