The very popular Hiten Tejwani and Gauri Pradhan along with their partner Nandini Singh got ousted from Sony’s Kabhi Kabhii Pyaar Kabhi Kabhii Yaar last week. Recent reports suggested that Gauri made a hue and cry when she got to know that they were in the bottom two. It was also reported that Gauri refused to participate in the show as she did not agree with the format. All efforts of  Mahesh Bhatt to explain the format to her was in vain as Hiten ended up dancing with his yaar Nandini Singh for the final time, which was followed by their elimination. 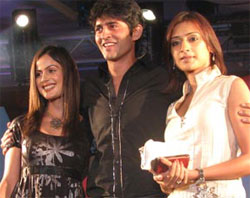 Featured Video
However, Hiten Tejwani claims that Gauri’s words were blown out of proportion. “First of all, the format of the show was not made clear to the contestants earlier. We were all taken aback when we got to know that the jodis who were in bottom two had to perform again on the same number they had performed before. And this is exactly what Gauri pointed at!! When we were asked to perform again with the other lowest rated jodi(Vishal Singh-Dimple-Proneeta), Gauri requested the judges to eliminate a jodi based on the previous performance. She voiced that there is no room for a big improvement as the jodis will be performing on the same number and that too, without more practice”.

Hiten says that the viewers will get the right picture when they see the particular episode on TV. “The report about Mahesh Bhatt overhearing Gauri is totally wrong. When Gauri refused to perform again, he said that this was the format specified and we had to abide to it. After this, Gauri took a call and said she would not perform again. So I performed with Nandini after which the elimination happened as we got the lowest markings. But again, the question of Gauri backing out does not arise here, as according to the format the two lowest rated jodis had to perform either with the yaar or pyaar”.

When asked whether they were unhappy about the elimination, Hiten quips, “Not at all! We enjoyed a lot and above all, this is a competition where anything can happen. This is not the end of the world, so we will move on!!”.

Lastly, when asked whether there will be a wild card, Hiten quips, “I have no idea at all. You need to ask the creative here”.

11 years ago I remember this! Lord, what a huge and annoying hassle this show was. It's great they got of this mess at the right time cuz of Gauri, who thankfully, had sense to withdraw when the format is extremely unclear or else everyone is mindless sheep. *sigh*Also, reading some of these replies makes me realize how the world truly is once again. Sad. People misunderstand each other day in and day out, if people really cared or tried to understand another person, the world would be a better place? I doubt this...even now.

14 years ago Right decision taken by Gauri at the right time... I mean same song with not more practice is useless... although i feel that format of the show is basically wrong... Luv Hiten n Gauri together, they hv amazing chemistry amongst all other participants......

+ 2
14 years ago that sucks that they're out,I was counting on these guys to win,and Gauri was right,they should get points based on their previous performance.

+ 2
14 years ago agree this show's format sucks...why r they so many different types of dance shows now...this show is sooo unfair because there is a girl who is tina who is professional dancer n she is competing with girls who never danced on stage...but whatever...they should have a simple format...the only dance shows should be are Nach baliya n jhalak diklaja...bc both of them have a simple format n good judges n its fair!!!

+ 7
14 years ago Hiten rocks simply U have a long way to go Hiten, U and gauri have amazing chemistry all the besht to juuu

14 years ago i care damn abt this show's winner,this is purely a basied show where chepa games r playing,there is no public voting warna will teach that dirty judges some lesson bt making GHT win,and moreover that this ghatiya show dn't deserve Gauri-Hiten,GHT R BTTER THAN THE BESTEST

14 years ago wow i thought they were gonna win buh i don;t care i was popular wat happend noe ... inever there fan... bu ti though they were popular i think they have more fans on star and those ppl don;t watch sony well i dunoo n don;t care..lol