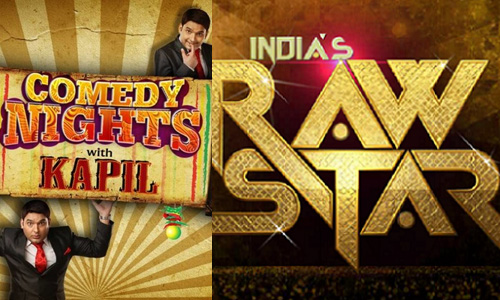 It is raining actors these days on the sets of fiction as well as non-fiction shows. We have seen Bollywood biggies coming on the sets of television shows and gracing the event. TellyBuzz had recently reported about actors like the star cast of Kill Dill coming on Comedy Nights with Kapil and Bigg Boss 8 on Colors. We had also reported about actors who came in to promote their movies on India's Raw Star on Star Plus.
Well, this time again we have a movie star cast coming on the sets of Comedy Nights with Kapil. The show in the upcoming episodes will see actors Kalki Koechlin, Ileana D'Cruz, Govinda and Saif Ali Khan. Kapil Sharma too went on to twitter to share his thoughts. For the smae he tweeted regarding the same-
"I forgot to mention that they all r coming for their movie Happy Ending.."
Besides this, the star cast of the show will also be seen on Star Plus' India's Raw Star.
Star Plus popular singing reality show Indiaâ€™s Raw Star is garnering lot of attention from the masses for its brilliant artists, host and judge of the show. This show has many celebs from Bollywood coming for promoting their upcoming movies. While this week the celebs who will be seen on the is Iilena D'Cruz, Saif Ali Khan and Kalki Koechlin to promote their upcoming film Happy Ending.
Well, this team of Happy Ending is first time appearing on the small screen to promote their film. It would be interesting to see if they can add more masala with the performances of the Raw Stars.
Keep reading this space for latest updates on your favorite shows.
Upasana Patel and Aakruti Damani
1 Likes

ShrustiM 6 years ago omg i thought cnwk will end because it was written happy ending then i came to know its a movie name :D thank god its not ending love u kapil,dadi,siddu pajji,guthi,sumona,palak ,raju,bua