Anupam Kher, one of Bollywood's oldest actors alongside Big B and Dharmendra was born on March 7, 1955 in 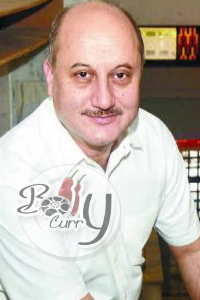 Shimla, India. Today, the actor, producer and director turns 56, starting a new chapter of his life!

The actor has appeared in nearly 450 films and a 100 plays with Aagman, the 1982 Hindi movie, being his debut into B-Wood!

Other than Bollywood, Anupam has acted in films from other nations as well, such as Bend it Like Beckham and Bride & Prejudice.

He was also Chairman of The Censor Board and also held a post in National School of Drama in India.

Anupam is married to co-star Kirron Kher and has two wonderful sons, the oldest (Sikander Kher) being his stepson. His other son, Raju Kher is an actor just like his father! He appeared in Kher's directorial debut, Om Jai Jagdish.