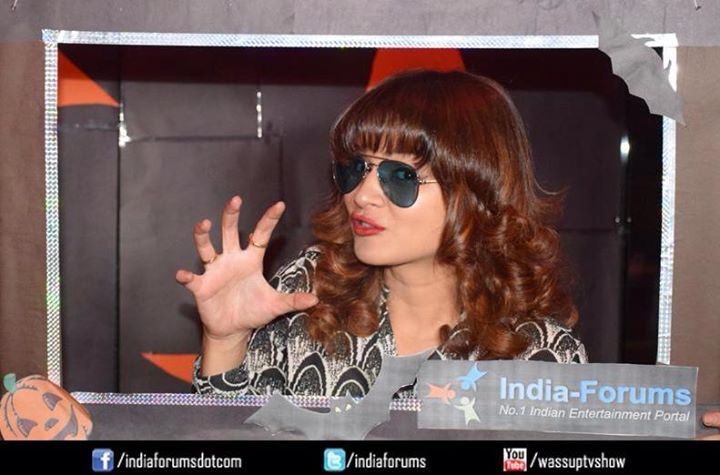 The scary sound, wicked witches, bats, ghosts and zombies surrounding us, remind us of the scariest day which is known as Halloween Day. On the occasion of Halloween Day yesterday many popular faces of TV joined India-forums for the celebration. One such actress was pretty looking Aashka Goradia who is seen as Rani Dheerbhai Bhatiyani on Sony TV's historical show Bharat Ka Veer Putra - Maharana Pratap.

Sharing her experience regarding the scary day Aashka says, "I don't know much about the history behind Halloween day honestly but I like to see people playing trick or treat, trying to scare people, distributing chocolates and more. I donâ€™t understand the combination of scaring each other and also spreading happiness by giving a treat at the same time, but I am sure that there must be some story behind it. If you see some years back, there was no such day celebrated in our country, but now in some metropolitan cities it has become modernized and is getting inclined towards western culture. So thatâ€™s the reason we are celebrating this day which has nothing to do with our Indian culture. So I donâ€™t regret of not knowing the history of Halloween."

She continues saying further, "I have seen many Halloween parties in America because itâ€™s their culture as I am sure they must be having a story behind Halloween but I never dared to go inside and dark place because it scares me. I am a very bad person to ask for a horror film as because I donâ€™t like watching horror films. I donâ€™t like those weird noises; I donâ€™t find any thrill in getting scared like that. So this is my first Halloween celebration and that is with India-forums."

rohinijasrotia 6 years ago U r the best
U just rock in mrp...love u

bitblue 6 years ago How come its your first HW. whenever DB is on screen for us viewers its HW.
she is that dam good in -ve role

rj_thakur 6 years ago Love this lady...
She is real beauty...