Colors' popular and one of the longest running shows Udaan started off with a bang and a very promising storyline and acting. The show continued to win hearts until last year when the rumors of show going off air were rife due to weak plot.

The show somehow managed to get an extension and hence it took a leap to try and bring new twists in the story. Recently, the show went through a major development as the lead actress Meera Deosthale who played Chakor left the show and Mere Sai actress Toral Rasputra replaced her. This came as a huge surprise for the audience.

The latest we hear is that actress Drisha Kalyani who earlier used to play Pakhi in the show is about the re-enter the show very soon. Yes, you heard that right! Apparently Drisha's re-entry in the show will amp up the drama in the on going track of the show.

According to sources, in the current track, Chakor returns to Azadganj to save Sameer and Anjor and suddenly Bhanupratap gets a hint of Chakor's return. Bhanupratap finds a letter that she left for Anjor, and hence finds it fishy. To confirm his doubt he goes to Pakhi's house as per the letter's address to find out the truth. Whatever happens next is what the upcoming storyline will reveal.

'Naagin 4' Gets A Tamil Version!

Both Shehnaz Gill & Paras Chhabra To Have Their Swayamvar on National ...

Ruby7 10 months ago Meera Deosthale loving all your intvs 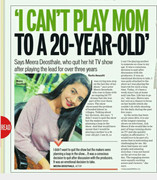 Hency05 10 months ago Love you a lot, Meera Deosthale

TanyaUdaanAnjor 10 months ago Tanya is the heart of udaan

LuvSSever 10 months ago Waiting for #MeeraDeosthale comeback. Missing her immensely Onscreen. Lots of love and best wishes to her .

Rithvik Dhanjani & Krystle D’Souza come together for a ...

Shilpa-Raj's Baby's Arrival Party: Inside Pics from the Pink ...

Hillary Clinton on Harvey Weinstein: It Was Time For an ...

Ananya plans on Connecting young girls with her character in ...

Paras Chhabra & Shehnaz Gill Burn the Gifts From The ...

Farhan and Zoya's Gangster Film in the Pipeline?