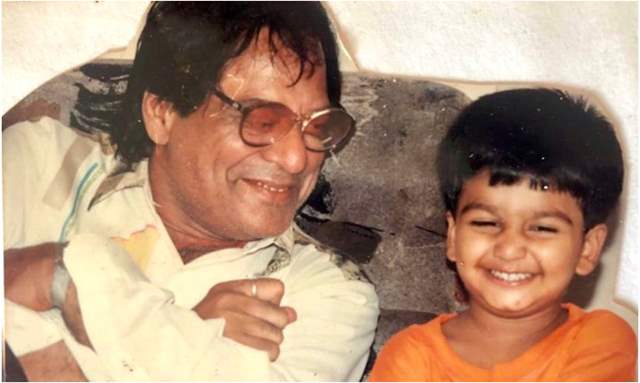 Bollywood lost another gem as veteran actor and comedian Jagdeep left for heavenly abode on 8th July 2020 at his residence in Mumbai. The legendary actor passed away due to age-related health issues.

His sad demise has left his family, friends and fans in tears and several Bollywood celebrities are mourning the loss of the late actor. Now, grandson Meezaan took to his Instagram handle and remembered grandfather Jagdeep as he penned a long note for the late actor and gave him a heartfelt farewell.

Sharing a throwback picture with the late actor and grandfather Jagdeep, Meezaan thanked everyone for the condolences and also talked about his grandfather’s journey in Bollywood.

He wrote, “Thank you for all the love and appreciation everyone has give to Dada. He gave 70 years of his life to the film industry. He was living and breathing films as all he knew since the age of 10 was films. His father had passed away when he was really young, so his father figures were K.Asif, Mehboob Khan, Bimal Roy, Guru Dutt and a few other directors of that time. Hes worked with almost every actor of his generation and gave everyone a run for their money. He was stress buster for people watching him on screen and brought a smile to everyones face. With having done 400 films his legacy lives on forever.”

“I asked him one day why the name JAGDEEP and he said with a smile (which was perpetually on his face) he wanted to bring light into everyone’s life (jag- world, deep- light). He never interfered in anyones life and always had a happy-go-lucky attitude and lunches at his house were like a story telling session where people of all age groups sat down and listened like children.”

Thank you dada for passing on that knowledge and those stories on to my family and I. Today I’m upset because there are so many things I wanted to ask you and so many I wanted to say but I guess its meant for another time. I could go on and on about your accomplishments but i guess its time to let go. You’re not here physically but you will always be in our hearts,” added Meezaan

He concluded his post by urging all the fans to share a quality time with their grandparents and also revealed his last conversation with his grandfather Jagdeep.

He wrote, “For those who have grandparents living with them or not living with them, PLEASE spend more time. I spoke to my Dada 2 days before his demise and my father passed him the phone while on facetime. All he said to me was “aur beta kaise ho, youre looking very handsome”. Thats the last thing my grandfather said to me and I dont think ill ever forget that image. Make an effort to pick up the phone and speak to them for 2minutes it'll make their day because I promise you when the time comes for them to depart from this world, you will regret it no matter how much time you guys have spent together. However old, grumpy and irritating they have gotten, cherish every moment with them and make the most of it”

CINTAA ties up with Zindagi Helpline for combating suicides, ...
48 minutes ago

Sushant Singh Rajput Revealing about the Moment he Got Very ...
48 minutes ago