Govinda is hurting his friends now?

Just when the industrywalas thought Govinda is a changed person now after getting the long eluding commercial success with Partner he has surprised all by his bad behaviour. Everyone is more surprised because this time the one to suffer his tantrums is none other than Sunil Shetty who is also equally responsible to help him professionally just like Salman Khan. 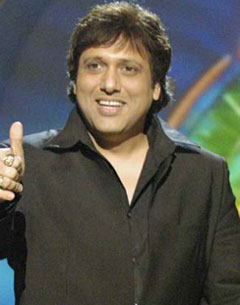 Featured Video
Sunil Shetty gave Govinda a substantial role along with Akshay Kumar in his home production Bhagam Bhag and later followed it up with his next, Loot. Everything was smooth on the sets of Bhagam Bhag wherein Govinda would always come on sets on time, never throw a single tantrum or bunk a shoot date. But now back in the reckoning with Partner and more big budget projects in his kitty, Govinda is back to his old ways!

An industry insider told us, "Govinda has sung a song for Loot and when the director of the film wanted to break the news to a prominent news daily, he required Govinda's quote in regards to the same for the article. When he requested Govinda for the same he flatly refused. The next day, this very same news paper had Govinda speaking in length about his coming back to singing songs with this particular film. The makers felt bad as he took on the entire credit to himself when in real, it was the makers who had managed to cajole him into singing the number and not co-operated when they required his assistance for the article."

"This wasn't the only incident." our source continues. "Sunil Shetty had zeroed down on three different countries to shoot a major chunk of his film Loot but just at the last minute when everything connected to it had finalised, Govinda put his foot down by refusing to shoot in these countries. He insisted to shoot only in Bangkok! His excuse was that since there are underworld elements at work in those three countries he wouldn't find himself safe there! Sunil Shetty was mighty pissed off as he was left in a fix at the last moment when the schedule was just a few days away. He had to give in to Govinda's demands without complaining about it. After all Govinda was his only big leading man in the film, since the other hero, Mimoh is still a nobody!"

"Shetty is keeping quiet but in real, he feels hurt that the very same person whom he has tried to help out is creating unnecessary problems to him." the source concludes.