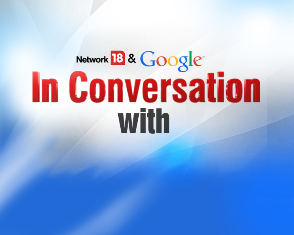 Network18 and Google announced a joint initiative today to help connect prominent politicians with voters across the country. The partnership involves a series of Google Hangouts with politicians titled 'In conversation'. First in the series will be Arun Jaitley, Leader of Opposition, Rajya Sabha, who will be addressing voters live via a hangout session on 25th March.

Announcing the partnership, Rajan Anandan, VP and Managing Director, Google India, said, "India is a politically vibrant country and the 2014 general elections promises to be a landmark in the history of this nation - it marks the beginning of political parties and candidates embracing Internet to reach out to an educated and digitally savvy group of young and potential voters. We are very excited to partner with Network18 to provide our users with all the information they need and engage the leaders of the country on Google products."

Commenting on this, Ajay Chacko, COO, Network18 added "At Network18, as a leading editorial voice in the country, we have always focused on ideas and initiatives that encourage our citizens to participate and engage. In Conversation' is another milestone in this direction and it assumes greater significance given the 200 million+ fast-growing, highly aware digital audience that is shaping the agenda during these elections. We are happy to partner with google in this pioneering effort and are confident that this will serve our audiences well."

Speaking on the partnership, Rajdeep Sardesai, Editor in Chief, IBN18 Network, said, "Perhaps more than any other election in the past, these elections are about capturing the imagination of millions of both first-time as well as experienced voters. And it is evident that the frontier of this battle is online. In Conversation' is a landmark because it meshes the power of digital with the impact of a town hall'.

Making full use of the power of social media and understanding the importance of getting real time feedback from the citizens of the country, Indian politicians have increasingly started using social media platforms like Google+ to reach out to the citizens. In 2012, Gujarat Chief Minister, Narendra Modi, was the first Indian public figure to use Hangouts to reach out to his audience. A number of politicians including Arvind Kejriwal of Aam Aadmi Party (AAP), Union Finance Minister P Chidambaram, HRD Minister Shashi Tharoor and others have used Google+ Hangouts to connect with Indian citizens.