The Harmandir Sahib, more popularly known as the Golden Temple, is a renowned Gurdwara located in the city of Amritsar, Punjab. The monument, which is encrusted in gold and hence it's name, witnesses many Sikhs making pilgrimage to the sacred site, including several Bollywood personalities. With such a prominent basis in many lives, the beautiful shrine has also played an influential role in a few Bollywood movies. During the week of Guru Nanak Jyanti, BollyCurry brings to you scenes shot by the famous Golden Temple. 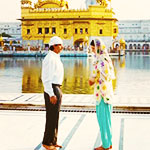 One of the biggest examples of when the Golden Temple helped focus the plot is the Shah Rukh Khan starrer, Rab Ne Bana Di Jodi. In the romantic flick, there is a scene in which the female protagonist, Taani (played by then debutante Anushka Sharma), visits the holy place with her husband Suri (Shah Rukh Khan) to seek blessings for a dance competition the taking place the next day. It is therein, at the residence of this divine place, where Taani finally understands and sees God in Suri and subsequently decides to stick by her loyal husband. 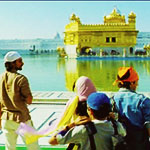 Likewise, Aamir Khan's Rang De Basanti also showcases the religious environment in a scene by the Golden Temple. This famous monument stands as another example where the main protagonist visits the religious site to pray, seek blessing and pay for his obeisance. Daljit, played by Aamir, attends the holy shrine with his mother and friends to pay their respects.

The beauty, it's serenity, the feeling of complete calm and peace; the Golden Temple has very little to compare to it. As we sign off, do you know of other movies which features this divine shrine? Perhaps you've visited the sacred ground? Let us know below and we'll see you next time!