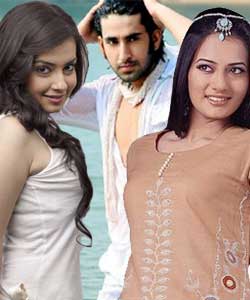 Sony TV's Chhajje Chhajje Ka Pyar is moving towards some major drama with Dhruv (Manish Tulsiyani) being put in a spot of bother by his father who requests him to marry Dimpy (Neha Janpandit).

The coming episodes will focus on Dhruv's dilemma which is made big by Ginny (Shambhavi Sharma) who also forces Dhruv to wed Dimpy.

Our source states, "Dhruv is lost when his father requests him to marry Dimpy. He does not know how to react and stays numb. His father tells him to think over it and get to a good decision. Dhruv now realizes the reason for Ginny avoiding him and bad mouthing him. He confronts Ginny and this is when she requests him to forget about their love and wed Dimpy, as she would not get a better life partner than him. Dhruv refuses to do so, and this leads to a tiff between them".

How will this love triangle get sorted out?

Some big revelations coming in the Sony show..

9 years ago thats so stupid seriously after all they went through shes gonna throw it all away?

+ 2
9 years ago Now this is a new one.. dhruv is only 4 days elder than ginny and he is going to marry dimpy who is ginnys elder sister.. wat a blunder..
Dimpy is working and dhruv is still studying in college LOL!!!!

Harp_95 9 years ago NNOOO!! Please dont do this! I want Druv and Ginny!

9 years ago The whole track is DUMB. Way too Ghisa Pitta

9 years ago its not a love trianglee when only 2 people love each other n the third is just there..! i hopeee dimpy dhruv dont get married!!

+ 3
9 years ago wow...manish is looking good in the pic...anyways, lets see how this will proceed...i just hope dimpy dhruv don't end up together.

+ 2
9 years ago I think dimpy finds this out n rejects the purposal herself...

11 years ago this duo is amazing i tell you. keep it up sharib and toshi! the music of jashnn isnt as powerful as the music of RTM but oh well...love nazarein and aaya re. i hope movie is good- adhynan needs a break.