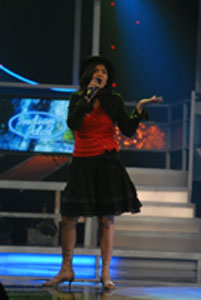 Indian Idol is all about Song and Dance. So can we get the Best Entertainer right here? The Master of Twists and Turns in Dance, Govinda is the Celebrity Judge this week in Indian Idol. Watch out for some electrifying performances by the contestants, matched with some great moves and shakes from the Master, Govinda himself….The stage this week was set on fire by the scintillating performance of Ankita Mishra , but as always, she made the Dancer in Govinda to shake his ribs…

Govinda's moves could put many a youngster to shame. The ease with which he danced to the vintage hit “Babuji dheere chalna” brought the house down. He followed it up with “Babuji zara dheere chalo bijlee khadi deko…”. 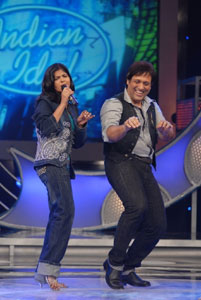 Ups and Downs are Part and Parcel of life.. The best example for this is Govinda, who after a slip in career is now back with a bang with the film Partner… Govinda is all praise for Buddy and ‘Friend Indeed’ Salman Khan who stepped in to help Govinda in his hour of need. Talking about the film Partner, Govinda exclaimed, “We only realized how funny the film has turned out to be when we saw the final result,". He is keeping his fingers crossed that the film will put him back on the comeback trail. Govinda fans are hoping the same too.

Now to some Tidbits of this week’s Happenings: 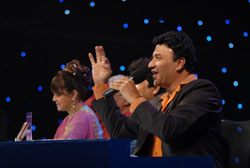 ‘Lage Raho, Annu Ji’ – After Emon Chatterjee, Its now the turn of Prashant Tamang to get a taste of Annu Malek’s comments.. Annu Malek left no stone unturned when he asked Prashant to stop smoking, for better results in life.. Annuji did not give an ear, even as Prashant kept saying that he does not smoke at all… Now Prashant, the shy and reserved Nepali who has done his people proud, is afraid their sentiments will be hurt and most of all his mother who will wonder what her son is up to in Mumbai! It is time Annu Malek got his facts right before he gets judgmental about the already nervous youngsters! 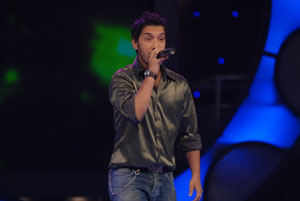 'Tussi Chagaye Ho Ji’ – The Wild Card entrants Amit Paul and Ankita Mishra have everything going right for them!! Both of them got everything right this week too, their great performances week by week is now surely giving a Shiver to the other contestants.. What amazes the judges more is the fact that both Ankita and Amit are so very dedicated that, while everybody drop dead tired to the bones after a hectic day's schedule, these two can be spotted in some corner or the other rehearsing for their songs. Probably it is Wake Up time for the other contestants, they now need to remember that these two have been through the pain and disappointment of being ousted from the show. Now, they are here to Fight it out and they are driving the whole nation crazy with their consistent performances week after week!!


All About Male Bonding – Wanna cherish and enjoy the Male Bonding on the Indian Idol sets, then you need to see it to believe!! Right from the Piano Round, the boys made a pact that they will be friends no matter what, keep no secrets from each other and entertain-- no groupism. Result: The boys are buddies and have great fun at the expense of the girls sometimes. Surprisingly "the founder members" of this group were none other than Parleen Singh Gill, Shantanu and Alisha's favourite Suhet!

A Dream Come True – The Journey to Indian Idol has been a Dream Come True to many here.. For contestants like Smita and Prashant, making it to places all over India is just a blessing in disguise. Coming from a low financial background, Prashant says that, being a cop whose posting can never be outside Kolkata, he is delighted to have traveled to places like Mumbai and Hyderabad !! 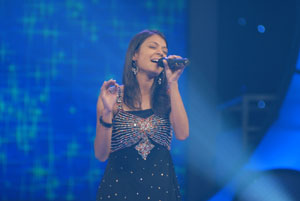 Siddhivinayak Chale Hum – A visit to the Siddhi Vinayak temple is what the contestants cherished the most this week.. While Charu had great satisfaction after walking barefooted to the temple, Chang, said he often visits temple, he has been to a mosque once but going to Siddhi Vinayak Temple was very special. Amit said he did what he always does when he goes to a temple… he never asks for anything but prays for the happiness of all! There is little doubt that these small town kids are as good human beings as they are singers. May the Lord always keep them so!


So watch out as this Friday’s Gala will be yet another Mindblowing Evening with lots of performances to Remember!! So get Ready to Cheer your Favourites and yes, to keep them at the Top!!

Bansari7 13 years ago I am glad that anu malek asked prashant to stop smoking. why should you guys hate him for that?????? smoking affects your singing bigggg timeeee!!! he was just trying to help prashant. and in the other tellybuzz article, prashant himself admitted that he smokes but noq he quit. but seriously there is no reason to hate anu malek just because he was trying to help someone get rid of this bad habit.

ammmu 13 years ago What a sweet article.... hmm, it's definitely shown then that they are practising too much... take a break sometimes!! What a fun epi, can't wait to see it, thanks Sree di!

natasshafan 13 years ago Thanks...this is awesome!!!
Can't wait until tomorrow!

tantric_guru 13 years ago why does it matter to anu malik whether prashant smokes or not?

julee 13 years ago why it matters to him if somebody drinks/smoke or whatever s/he do. is it true that all idol/actor/president/judge/pri minister/etc don't smoke/drink?
where are you Mr. Ana*l Malik? which world are you in? it is individuals life, how s/he want to enjoy, don't try to be dictator....

priyankumupal 13 years ago Very well writen article. Amit is so sweet when he said he doesn't ask anything for himself at the temple. Anu ji stop giving Prashant trouble. The poor guy must be so worried and upset. Please don't say things without getting your facts straight. We don't believe you anyway.

ana13 13 years ago meee 2 hate anu malik..sheesh he's soooo bad!!!!!gosh.....hw can ppl b sooo irritating!!!!!!! I knew Amit will rock....n frankly speaking hes duin bettr than all but still chang'smy personal fav. lol no one can take his place...hehe!!!! lukin frward for 2morrows epi. though i dun like govinda tht much but still it wud b fun!!!

galacticgem 13 years ago why he is becoming so rude to prashant? prashant is so innocent guy. i think he is doing all this coz he is nepali. hey u anu malik we nepali wont tolerate it. plzz dnt think that u cant do nothing..... n the person who is sitting rite next to u i.e. udit narayan jha he is also nepali.. see we nepali have got such full bundle of talent like udit n prashant. plz behave urself.... prashant is a gr8 singer

-DulceMaria- 13 years ago thanks wanna see govinda dance with ankita:D