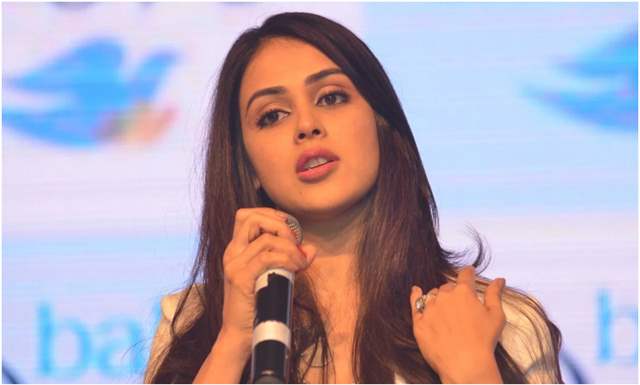 India has seen an unprecedented spike in Coronavirus cases yet the frontline workers are trying their best to contain the situation and offer their services to help the masses. While the nation remains to be on a standstill, government officials have been taking up the right measures to contain the spread of COVID-19.

Meanwhile, several Bollywood celebrities contracted the deadly virus including actress Genelia Deshmukh and thanks to the doctors, she has finally recovered now. During a recent interaction with ETimes, the actress revealed how she learned of her contraction to the virus and how was it to stay isolated.

The actress revealed, that she had been to Latur, where someone in the house there had tested positive. She also revealed her symptoms and how she was informed about her tests.

Speaking to ETimes, she said, “Well, we had been to Latur. Someone in the house there had tested positive. So we all had to get our COVID-19 tests done. I never thought in my wildest dream that I would test positive as I had absolutely no symptoms- no cough/fever/cold/nausea/breathlessness- in fact just nothing. We got our tests done in Latur and we were supposed to come back on that day. We decided to stick to our plan and it was on my journey back that I got a call that I had tested positive. Thankfully, Riteish and the kids had tested negative.”

Post her coronavirus test Genelia stated that she never went home and headed straight to the hospital and prepared to be admitted. She also mentioned that I was totally asymptomatic and even my X-ray was clear- I was consequently advised to quarantine myself at home.

I didn't go home. I headed straight to Lilavati Hospital, prepared to be admitted. I was ready to deal with it head-on. But when they checked and saw that I was totally asymptomatic and even my X-ray was clear- I was consequently advised to quarantine myself at home. I chose to go and stay in a separate place, our other flat. I didn't want to risk anybody. I was expecting that I might contract fever or some other symptom on the 3rd day. But there too, nothing happened.

The 33-year-old actress also revealed her experience of staying in a separate flat and called it the most challenging part. She mentioned that considering the situation she should have quarantine herself in a separate room at her house. Genelia explained that it was very tough to stay alone, not hearing even anybody's footsteps and it was terrible to be in surroundings which aren’t a person’s daily routine and comfort; sitting there doing virtually nothing.

“My friends, however, kept me cheerful by calling me up, every now and then. And let me tell you the way Riteish took charge of the kids, it was remarkable. He was extremely worried but braved it out. Riteish is a great husband and father,” she added.

When quizzed about the reason she spoke about her journey amid her treatment, she said, “I began to feel there are too much information and misinformation on Coronavirus out in the public domain. Which is why I am finally speaking.”