Zee's Dance India Dance is in election mood with mentors campaigning for their contestants. Everyone is busy making sure that their participants are safe, and amidst this mentor Geeta Kapoor gets a shock of her life. 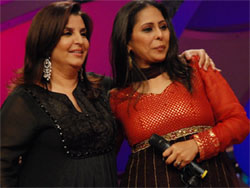 Featured Video
"Geeta's friend, philosopher, and guide; the ace choreographer and director, Farah Khan pays her a surprise visit on the sets. Well, thanks to the crew, the surprise was well packaged and kept under wraps until the episode had started rolling. Geeta was blindfolded but she recognized Farah just by her touch. Such is the bond of a guru and a shishya. What ensued after was these little moments that were shared between the master and her master", says our khabroo.

Farah dotingly calls Geeta as Geetu. "She fondly spoke about their fun days and said that all her signature choreographies would not have materialized had it not been for Geeta's assistance", adds the source.

There is a common thread that binds the two together. "And that's their eternal crush on Grandmaster Mithun Da. Farah fondly remembers the days when she used to go to Mithun Da's place to teach dance to li'l Mimoh", chirps the little birdie from the sets.

Geeta also performed on Saroj ji's choreography. "She danced on the tune of Mera piya ghar aaya… with Alisha and Khushboo adding the oomph quotient", adds our source.

Well Farah's presence was the most memorable moment for Geeta, and to witness their awesome chemistry, tune in to watch Dance India Dance Farah Khan special on 18th April, 9:30pm only on Zee TV.

+ 8
13 years ago lookin forward to watch the episode!
thanks