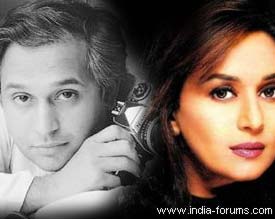 Mumbai, Sep 16 Bollywood diva Madhuri Dixit says Gautam Rajadhyaksha, who died of a heart attack Tuesday, says he has left behind unfinished business and so many memories.

'I can't believe he's gone! He was still so young and vibrant. The last time we spoke he was so excited about the school he was starting in Pune. Now he has left behind so much unfinished business, and so many memories,' said Madhuri, from Denver, US.

'Do you know, he always said, 'I've two daughters Madhuri and Kajol'. And when I got married, and later Kajol, he felt he was giving away his daughters. He was such a gentle soul, never said anything hurtful. And what a wonderful artiste.

'We shot some of my most beautiful pictures. And I'll be proud of them forever. You know, in those days there was no artificial gimmicks and touch-ups to beautify the pictures and certainly no photoshop. Gautam shot in natural light. He was so kind. He would always say I looked good from any angle,' she added.

Rajadhyaksha passed away Tuesday following a massive heart attack. He was 61.

One of the most sought after glamour photographers in the film industry, he had worked on portraits of almost all the leading stars. Apart from that, he was also associated with films like 'Hum Saath-Saath Hain', 'Hu Tu Tu', 'Kuch Kuch Hota Hai' and 'Hum Aapke Hain Kaun' as special stills-photographer.

Madhuri remembers the wonderful team that she formed with Gautam and makeup artiste Mickey Contractor.

'We were always together for photo-shoots. And Gautam would insist I use minimal makeup. For Gautam less was always more. Gawd, why did he have to go so soon? I'll miss him,' said the actress.